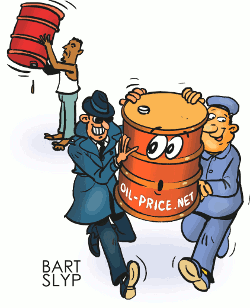 China, western Europe and the USA are cutting deals with oil producing nations, leaving anyone else hanging dry.

Oil supply crunch and the world.

Then the common man's dream saw result-oil prices marched downwards. So, there ought to have been celebration everywhere, only the euphoria was missing.
The reason: underinvestment in oil was equally bad. And, The International Energy Agency estimates that an oil crunch could happen earlier than 2020 because of increased demands.

Now, the oil prices have risen again past $80 and as the demand is picking up, the prices will rise even higher. No doubt then that we are staring at a sudden supply crunch in oil and gas. So, when that happens, what are the implications of this oil supply crunch?

For a developed country like the U.S., oil is more to do with national security. The same goes with countries of western Europe and China where there is an increasingly blurry line between politicians and the oil industry. Hence a supply crunch could translate as a paramount threat to national security-enough of a reason to escalate tensions or wage war on any oil producing country, as has been done in the past.

Want further proof of political involvement? Nowadays when any major oil deal is cut, diplomatic corps of these countries are directly involved in the process of negotiation. Indeed countries like the US, Western Europe and China purchase oil with strong political and diplomatic pressures, and the resulting deals more and more often guarantee exclusive rights of purchase to the buyer, leaving anyone else empty-handed. Dealings in Crude Oil are fast becoming a 'winner gets all' market place. This month China has inched closer to acquiring almost one-sixth of Nigeria's proven oil reserves. Apart from the African continent China has also invested heavily in Latin America for oil.

Thus many countries are lagging behind the oil race for want of power and influence- a recipe for economic disaster? Yes. Even countries rich in Oil like Nigeria are left out of the race, as oil is earmarked for 'Export only.' Already, there's conflict brewing in the Niger delta between the oil corporations and the people who feel exploited by them.

The most affected, in the current supply crunch, will be the people in the poor countries of the world. Remember, last year's food riots in many African countries, Haiti and Philippines? Agriculture needs oil not only for transportation of the produce, but also for production of fertilizers like Ammonia. Thus, short supply of oil will lead to more food riots due to the high cost and scarcity of food. Apart from agriculture, Sub-Saharan Africa lacks a power grid infrastructure and gas-powered generators are used to power cell phones needed to conduct business and exchange. Unreliable gas supplies will cause doom and gloom.

The lifeline of any nation depends on guaranteed access to crude oil, a matter of national security. So increasingly crude oil is secured rather than bought, where the most influencial governments assist their oil companies in acquiring portions of foreign oil reserves by means of influence or diplomacy or otherwise, thus pre-emptively cutting future buyers out of the declining supply.

« Previous
Loss of elasticity in the oil price.
Next »
Why does OPEC lie about its oil reserves?