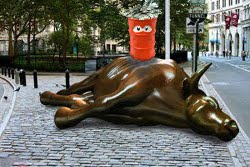 The US credit downgrade is a downgrade of the US dollar, which oil producing nations will denigrate increasingly.

Standard and Poor's (S&P) credit rating for the US was pulled down a notch to AA+ from AAA in August 2011 for the first time in the history of the rating system. The agency had expressed concerns about the nation's ability to manage its debt and hinted that the Obama administration should pull up its socks in this matter. The move was not a surprise to many since the agency had made it abundantly clear that downgrading was a possibility if remedial measures were not implemented. The fact that the downgrade occurred so early, was definitely surprising. In the aftermath, US Senators are rushing to bring in austerity measures at the earliest in the hope of getting this move revised.

The S&P downgrading of America's credit rating, as well as the rumors of a possible credit downgrade in Europe as well has had a far reaching impact on global markets and economies. The price of crude oil is no exception to this and fell nearly twenty percent in the period following the S&P move. It touched the lowest levels in almost eight months in the wake of the announcement. Traders chose to exit from the commodity and turned towards other lucrative investments such as gold and Treasury bonds. Brent was hovering around $100 and WTI was below $80 in the immediate aftermath. This was on fears that the US market might sink into recession very soon.

The more than five percent drop seen in the Dow Jones did nothing to allay fears. On the positive side, lower crude prices will translate into cheaper gas at the pump. It will even mean cheaper airline tickets and lower rates of transport too. However, when faced with a grim economy people are likely to cut corners. It is the fear of the country's debt spiraling out of control which has brought down oil prices. Stock prices are an indication of economic confidence and with these plunging, oil has also immediately gone down nearly twenty percent.

By contrast, some leading financial institutions have expressed confidence in oil price stability in the medium term. They claim that oil will touch $130 in a year's time but considering the current situation it seems a risky bet. The demand for oil, which continues unabated in countries like China and other developing markets, is expected to support prices. Despite the uncertainties in the market, the price of crude oil continues to be higher than the $71.65 it touched 12 months ago. The destinies of oil and the dollar are closely intertwined with the US credit standing. So, any kind of aspersions cast on the well-being of the country's economy or its ability to cover debts can prove disastrous and bring about a domino effect.

Any major development in the US, which is the world's largest oil consumer, inevitably reflects on the oil trade. Besides the US, quite a few European nations are going through a significant financial crisis. The shrinking supply of oil is one factor influencing steep price rises. Oil is increasingly being seen as a viable investment opportunity and this is the other reason why prices fluctuate in a volatile manner. The reason for it being so lucrative is that it is a precious commodity.
To make things worse, the successive Federal Reserve stimulus plans have flooded investment banks with cash to "invest" in the economy. And to an investment banker sitting on a lot of cash, crude oil is a very attractive investment right now. Aside from the "stimulus" money, oil's rise will be amplified by retail investors (as usual late at the game) who are pulling cash out of the market en masse and investing into hard assets.

Petrodollar: The Next Shoe to Drop

Make no mistake, the credit downgrading equals a downgrade of the dollar. And this downgrade of the dollar, previously considered a refuge currency, could not come at a more inopportune time. Many oil-producing nations such as Lybia and Syria are in a state of turmoil and looking for ways to regain political stability. Other Arab nations such as Saudi Arabia, not yet affected by the "Arab Spring" are doing all they can to avert unrest that could cascade into a civil war like in Lybia. Since all these nations' budgets rely almost exclusively on oil revenue, the petrodollar does not present itself in a favorable light to these oil-rich nations. Consequently, several major oil producing nations have announced their plans to move away from the dollar and instead accept currencies such as the Euro and the Yuan. Iran, which provides 12% of China's oil opened an oil bourse on Kish Island which trades its prized high grade oil strictly in Yuan and Euros (no dollars). This is not helping the dollar's situation in any way. If major oil producing nations begin moving away from the dollar, it will not be long before others follow suit.
In the meantime, previously US-friendly governments in the Middle-East are tumbling one after the other. New flags emerge, stamped with the crescent and the moon, symbols of fundamentalist Islam. For example, Libya's new National Transitional Council, upon the overthrow of Muammar Gaddafi immediately decreed a new judicial system based on Shari law. Following the "Arab Spring", pan-Islamic governments are gradually taking over smaller oil producing nations and these "mini-Irans" will likely stop accepting dollars for their coveted oil. Newly minted governments, eager to bring stability and assess their leadership will drop the dollar because of the negative image of its tie to previous governments. Over time this will result in a lower demand for the greenback and greatly reduce its purchasing power. The price of crude oil in dollars will spiral upwards while the credit rating continues to plummet.

History indicates that very few nations, who had their credit rating downgraded from AAA, have ever been able to recover it. And those who have managed to recapture their former glory took anywhere between a decade to two decades of fiscal discipline to achieve this. But since fiscal discipline is not even on the radar screen of the US government it is safe to predict that the US credit rating is headed even lower. Today oil is traded in dollars so for every gallon of gas, say, a chinese motorist buys, he first has to change his chinese currency into US dollars then buy crude oil with these dollars. This not a very convenient arrangement to say the least for anyone but the dollar. The term "petrodollar" denotes this unique status of the US dollar: while no other currency is any longer backed by something of value like gold, the almighty dollar is the only currency backed by crude oil, "black gold". But once oil stops trading in dollars the world's need for the greenback will be strongly reduced if not eliminated. When this happens, expect the value of the dollar to decline sharply, the price of crude oil denominated in dollars to skyrocket and the US credit rating to continue its journey down the rest of the alphabet.