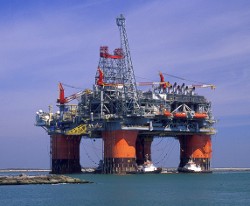 Among all the undertakings in the world, this could rank as one of the riskiest ventures-oil drilling. Here's a sampler for what we are talking about from Mukluk Island: In 1983, twelve companies spent nearly $2 billion drilling for oil in the Beaufort Sea, North of Alaska. The exploration was based on oil stains found. But the well turned out to be a dry hole with no oil. Little wonder then that oil drilling is risky and expensive.

According to Arizona Geological Survey, Oil drilling in Arizona costs between $400,000 to $1,000,000, depending on the depth of the hole and its location. A rig capable of drilling most exploratory holes typically costs $8,000-15,000 per day. Well then, why is drilling for oil so expensive?

It is because of some of the costs involved:

Onto the process of drilling, how is the well drilled?
Well, the drilling rig bores a hole into the earth through which steel pipes are inserted. Pipes or casings like cement would then be put in between for strength as well as for separating different pressure zones- if they exist. The well is then drilled further, and more casings are added. At times, 2-3 layers of casings would be built depending on the geological composition of the zone. The rotator table then passes the drill string onto the hole. The drill string rotating by 'top drive' or 'power swivel' mechanism extends the drill bit. This extension is done with the help of the derrick (the structure holding the drill string). The drill bit then cuts the rock into pieces.

Drilling fluid, also called mud-mixture of fluids, chemicals, abrasives and solids - is then pumped down the drill string. This fluid clears the cut rock bits onto the surface. Compressed air is substituted for the fluid, at times. In turbo-drilling, a turbine is placed in the drill string. Mud flows through this turbine causing the drill bit to rotate.

We saw earlier that oil drilling is expensive, so are the drilling contractors because:

Transocean: This is the world's second largest offshore drilling contractor. Recently the company penned a contract for a well in West Africa for $630,000 a day and its Deepwater Pathfinder is the most expensive drill ship in the world. It also signed a three year contract from a consortium of contractors at $460,000 a day in the Q3 of 2009. Most of Transocean's drilling is occurring in the Far East, the U.K., Middle East, the U.S., as well as parts of Africa and Asia. Average day rate of Transocean has moved from $211,900 in 2007 to $283,800 in the third quarter of 2009.

Seadrill: This Norway based company received contracts worth $4.1 billion for three deepwater rigs from Brazilian Petrobras - day rates was more than $600,000.

Though the oil prices have fallen in recent times, the companies still earn profit, in fact, their profit has surged- as seen from the above discussion-- as most of their contract run through 2010.

« Previous
Could Oil be a safer investment than Gold?
Next »
The case for floating oil storage