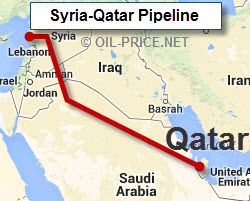 Qatar supports the Syrian conflict to build a pipeline through Saudi Arabia, Jordan and Syria.

Crude Oil and the Syrian Conflict

Noticed something whirring overhead? Must be the smell of drama. It seems that the Arab countries are willing to fund the entire operation of any U.S. military adventure in Syria. Says, Secretary of State John Kerry, "That's how dedicated they (Arab Gulf states) are at this. That's not in the cards, and nobody's talking about it, but they're talking in serious ways about getting this done".

But why would the Arab Gulf states want to pay for the marauding invasion of Syria?

Oil and gas, of course

Arguably, Syria isn't a major producer of oil and gas. Depletion of oil reserves is a vital problem facing the energy sector of the country. The oil production has decreased over the years. Syria had 2,500,000,000 barrels (400,000,000 m3) of petroleum reserves as of January 2010. So, the whole hullaballoo about Syria is definitely not about oil in the Syrian territory. What then?

We'll explain:
The story begins with Qatar. Well, Qatar has spent billions of dollars supporting the rebel factions in Syria. Not without reasons, though. True, instability props up the oil price, but more importantly Qatar has the world's largest gas field (The South Pars/ North Dome field, shared with Iran) and is the largest exporter of Liquid Natural gas in the world. As a result of these facts, Qatar wanted to build an underground natural gas pipeline from the country's North Field to Turkey, traversing Saudi Arabia, Jordan and Syria to Mediterranean and then to Europe. Turkey too was in favor of this 'Islamic Pipeline', as it would have made the country a key player in the transit, not to mention profits. However, the Assad regime wasn't interested as the proposed pipeline would have negated Russia off the equation. Instead, in the year 2010, along with Iran and Iraq, Syria proposed to build a 3,450 mile pipeline costing $10 billion to transport oil to Europe directly from the South Pars gas field traversing Syria. This Iran-Iraq-Syria pipeline, set to open in 2016 has an estimated capacity to pump 3.6 billion cubic feet of natural gas per day, which would benefit Iran, as you may have guessed. So, Iran's gain left Qatar and Turkey licking their fingers. Bear in mind that we are talking in terms of billions of dollars in revenue. And, do not forget that Turkey and Qatar are allies of the US. Yes, more than a square, it's a circle with all points leading back to the US.

Also, there's the Nabucco natural gas pipeline expected to connect Austria to Eastern Turkey with gas received from feeder pipelines of Azerbaijan, Turkmenistan, Kazakhstan. Uzbekistan, Iran, Iraq and Egypt. Yet, the project has been dragging for more than a decade now. So, if the Assad government falls, Turkey could re-route the Nabucco pipeline to traverse through Syria. Well, why wouldn't Qatar and Turkey want Assad out the door?

What about Saudi Arabia? After all, it too has been a vocal supporter of the rebels ? Hegemony of Saudi Arabia over oil again. Into this scene comes in Russia, alongside. Saudi Arabia has been pressing Russia to discard the Syrian President in favor of a lucrative arms deal worth more than $15 billion and further investments in the country to boot. Also, Saudi Arabia is said to have assured Russia that it would not sign any agreement that would jeopardize Russian gas exports.

Not a bad deal, eh? But, to add in some perspective, Russia and Syria enjoy a rosy friendship. In 2005, Russia played a crucial role in springing up the Syrian economy writing-off about seventy percent of Syria's debt. Russia also has substantial investment in different sectors of the Syrian economy. There's also Tartus, a Syrian port in the Mediterranean which helps Russia as an official base for its ships and also as a point of delivery for weapons to the Syrian Government. In spite of claims and counter claims that Russia had evacuated all of its military personnel (sixteen- ship Naval task force) from the naval base, the reality remains that Russia Naval base is still functioning as ever. Of course, the official version of 'civil personnel only' as maintained by the Russian is debatable. Yet, the US entry in Syria would mean Russia losing its only military installation in the Middle-East, (not to mention the only Russian naval base outside the former soviet Union- history has changed, indeed)

In addition, Russia is the biggest extractor of natural gas in the world. As a result, it is also a major gas exporter. The Assad regime assists Russia by blocking Natural gas from flowing into Europe through the Persian gulf, helping Russian company Gazprom enjoy salacious profits. Unsurprisingly, almost a quarter of the natural gas consumed in Europe comes from Russia. Which is why, enjoying a vast market in Europe, Russia has the comfort to use this to blackmail Europe as in 2009 when it shut off supplies for days. From then on, Europe has been trying to find other markets for natural gas. (Still, it's estimated that Russia would continue to be EU's biggest natural gas supplier even after a decade). One hope has been the Iran-Iraq-Syria pipeline, which would have helped Iran. Of course, US wouldn't want Iran to benefit in anyway, would it? Also US involvement in Syria would also mean direct loss for Russia. And would any government want events contrary to this?

Elsewhere, Iran's support has been crucial for the Assad regime. Historically, the two countries have shared a symbiotic relationship for long against: Saddam Hussein, the US and Israel. If Syria falls, Iran would lose one of its strongest allies, a Shiite Muslim nation at that. Recently, France has softened its stance on Iran to even a possible inclusion in Syrian peace talks. So has the US.

Replacing al-Assad's secular government with an Islamic state rules by groups affiliated to Al-Qaeda would lead to serious repercussions the world over, but the Western powers are so blindfolded that they are willing to write off peace.

Again, here energy and crude oil interests, albeit shy from the public eye, prevail and they're dictating the rules of engagement. The bottom line is that western powers are interested to intervene in Syria solely for energy-related geopolitical reasons that have nothing to do with chemical weapons or democracy.

« Previous
Oil Price Volatility on the Way?
Next »
Natural Gas Trucks - has the time come?