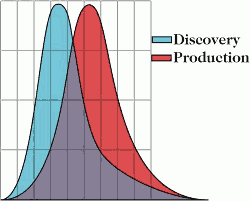 Oil prices will resume their march upwards when the economy recovers.

Someday the worst of this economic debacle will be over. Then the phenomenon of "Peak Oil", when the world's oil production reaches its maximum and begins a slow decline, will reassert its power to increase the price of oil.
Now I'm not talking about the end of oil, because there will still be reserves. I'm talking physics here: once you reach the halfway point of pumping any particular oil supply out of the ground, the pressure drops and the flow decreases, which leads to a steady decline in supply, and a corresponding increase in prices.
It's impossible to say just how big the reserves are, because oil-producing countries treat their oil reserve data like state secrets. Any speculation about their size, whether you're an optimist or a pessimist, is just a guess. However, it is possible to track how oil production has been in a worldwide decline since about 2005.

Albeit not quantified, there is knowingly a finite amount of oil left to be extracted. Technology improvements, such as processing heavy oil, plus deep water and horizontal drilling, have all been cited as reasons to not worry about the oil supply, but that technology is now 40 years old, and can't be considered as a cure for supply woes.
The drop in oil prices caused by the global economic slowdown has been seen by many as "return back to normal", back to the days of cheap energy. This is a foolish perception. China, aware of how undervalued oil has become, is building up crude oil reserves in its recently completed 102 million barrel strategic storage facility, with another two 169 million barrel facilities scheduled within the next few years. China loves oil and oil producing nations love China's big devaluating pile of dollars. While everybody was hibernating, China has become a major contender on what is left of the oil market.

When the economic debacle is over the global economy will have become more competitive than ever before over strained oil reserves. The "green shoots of recovery" may likely be seen in some places but not others. Two things are sure, though: every country's economic activity will still depend on the price of oil and countries such as China which bought cheap oil will have a head start.

Next »
Search for Oil