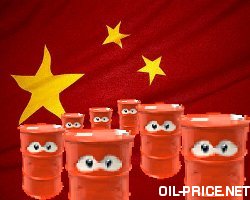 At present, China is the fourth largest oil producer in the world

Increasing role of China in the oil market

China, it seems, is everywhere. In what has become a routine, not a day passes without a mention of China in the news, in everyday conversations and predictions. As the next superpower, the country is wielding clout in every sphere possible. The growing influence is felt even in the oil market where the Asian giant is one of the biggest players.

Iraq's oil field is just emerging from the ravages of oil, but China is already there. PetroChina Co. has already got development projects for Halfaya and Rumaila Oilfield in Iraq. The company has also signed agreements for co-cooperation in the oil field with companies in Turkmenistan, Kazakhstan, Uzbekistan and Russia. Last year Chinese companies spent more than $32 billion to secure oil, metal, coal fields in Asia, Africa and Australia. The Chairman of PetroChina Co. has said that the company was planning to invest at least $60 billion for foreign acquisitions in the next decade.

Seemingly, at present, China is the fourth largest oil producer in the world. Last year oil output was put at 189.49 million tons, (3.79 million barrels a day) a fall by .04 percent than expected. According to the National bureau of statistics, China produced about 15.11 million tons of oil in the month of February. But, the country consumes oil many times more. As a result of which imports contribute to as high as 52 percent of the oil consumed.

Indeed, China became an oil importer only in 1993 but has come a long way since. China's oil imports could reach a record 210 million tonnes this year, up by 5.5 %. So how does China go about for energy? Let's see:

In one of the largest export deals for Australia, China National Offshore Oil Corp has decided to buy LNG from BG Group Plc's proposed export terminal in Queensland. Based on the deal signed, China would get 3.6 million metric tons of LNG yearly for the next twenty years from 2014. The deal is estimated to be worth more than $80 billion. Last August PetroChina Co. signed an agreement worth A$50 billion ($46 billion) with Exxon Mobil Corp. to buy 2.25 million tons of LNG with Chevron Corp.-led Gorgon LNG venture.

Of course, this is despite the tensions on the political front. One would remember the Rio Tinto trial where an Australian citizen and three of his colleagues were standing trial (since given 7-14 years of prison sentence) on charges of bribery and for infringing on commercial secrets. Anyway, the trial didn't stand in the way of growing trade relations with China. Also, PetroChina Co., and Royal Dutch Shell agreed to a $3.44 billion deal to buy most of the Australian assets of Arrow Energy Ltd., the coal seam gas producer.

"Australia's trading relationship with China is healthy and mutually beneficial" says Australian Energy Minister Martin Ferguson, "Australia is committed to strengthening that relationship and being an important partner in our region's economic growth."

In other deals, China's largest oil and gas producer, PetroChina Co., which holds about 7.5% stake in China Petroleum Finance decided to raise its holdings to 49%. The move made possible by buying stakes from the parent company China National Petroleum Corp. Thus, PetroChina Co. gets better returns on investment, as it gets finance quite easily.

On the oil reserve front:

China National Petroleum Corporation has presence in twenty nine countries in Africa, Central Asia-Russia, South America, the Middle East and in the Asia-Pacific. In 2008, the company produced about 138.75 million metric tons of crude oil and 66.41 billion cubic meters of natural gas.

Report from Chinese Academy of Social Sciences (CASS) suggests oil production to be between 177 and 198 million tons in 2010, which could increase to 182 to 200 million tons by 2015. Still, as stated earlier, China needs huge imports of oil. The crude oil imports were likely to bolster by 9.1 percent this year, according to a February report of China National Petroleum Corp. The domestic output is expected to decline after 2020, says the study. So, after 2020, nearly 64.5 percent of the consumption is set to be met by imports. At the start of the year the oil imports rose as high as 33 percent compared to the same time a year ago.

And, Africa is one potential place for China's oil expansion program. The country is the third largest trading partner of Africa with Angola being the largest source of oil. The top three countries on the crude oil import list last year were Saudi Arabia, Angola, and Iran respectively. As the Nigerian government is planning to increase its reserve capacity to 40 billion barrels of oil with four million barrels a day, it's looking to China for more investment. The country has been battering militants and political tension and is seeking to bring back investments. There are more than twenty licences up for renewal in the oil domain from China with investment of more than $50 billion riding on them.

China's march to find more oil for imports, hasn't been without controversies:
The government has been accused of supporting corrupted governments for oil-Sudan, the case in point. China is Sudan's biggest foreign investor and supplier of weapons to the Sudanese government. In 2007, CNPC signed a deal to explore for oil in North Sudan on the Red sea, in a joint deal with PT. Pertamina, the Indonesian oil company. The trade between China and Africa has crossed $100 billion on a yearly basis.

What China is doing:

The country is offering aid to countries rich in natural resources even if the governments have dubious human rights records. It also doesn't work to forget that Chinese investments in Africa have helped the continent with infrastructure like roads, hospitals, clean water, schools and electricity. This month the Chinese Foreign Minister Yang Jiechi said that Africa's oil imports from Africa accounted for just 13 percent of the total imports, lower than exports to the US and Europe. But then, China is all set to overtake the U.S. as Africa's second largest investor very soon.

In essence, China is pumping in massive investments into the oil domain in the form of exploration and licence deals. In fact, that is a good thing as underinvestment could increase the oil prices in the long run. But then Crude oil consumption is rising in China too. The IEA revised the oil demand forecast for China up by almost 100,000 barrels a day. China is expected to consume about 8.7 million barrels a day next year, or 3.6% above 2009, says the IEA. IEA predicts that China will account for about seventy five percent of global oil consumption by 2030.

On the face of it, a multi-polar world is for the better but could the globe afford to have another superpower consuming energy just like the U.S.? Ironically, on the clean energy front, China invested $34.6 billion in 2009, while the U.S. investment was $18.6 billion. But before rejoicing check this news too: In the search for unconventional energy sources the country has signed agreements with Canadian Athabasca Oil Sands Corporation to develop the environmentally disastrous oil sands project. Clearly, China is leaving no stone unturned in its quest for energy.