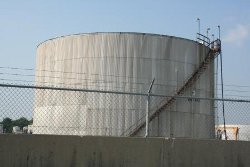 Contango is when the investor or producer puts the commodity into storage waiting for the prices to improve-before selling.

Oil Contango and its Effects on Oil Prices

A cold wave has engulfed much of Europe, the US and Northern Asia. The resultant freezing temperature has led to a thirty percent surge in the demand for heating oil. With it, the heating oil prices reached a thirteen month high last week. And today, the price of oil per barrel is the highest in 15 months. For a start, indeed, the cold wave is an important reason for the high oil prices, but there is another equally important factor as well: Oil Contango.

For oil, the price of futures is usually calculated using the present day price of oil (spot price) and the expense incurred in storing it. For instance, if oil per barrel costs about $ 70 today, you calculate the expense incurred in storage-about $20 per barrel. Then you add both and sell it at a price of $90 per barrel. So it's basically simple economics-just store the oil and sell it to make profit. In January 2009, the oil market started to get into a contago. Not least because the prices were very low at about $36 a barrel. In short, traders, oil companies, producers and investors put a large amount of crude- millions of barrels mainly in tankers- and refined products under storage.

This was termed 'super contago' as the speculators anticipated a huge/unusual profit when/if the markets recovered. Mind you, the investor could suffer heavy losses too as this theory is based mainly on speculation. Still, as the financial crisis was on, it triggered many investors to stock oil. Oil investor forums were awash with predictions of increase in oil prices six months on.

Looking back, the contago seems to have lasted for a better part of last year. Check out some figures for commercial inventories (oil held by refiners, producers, investors and others)

Oil pundits predicted that this 'super contago' could derail as soon as the stocks reached the maximum storage capacity. After all, it's not possible to keep on piling barrels and barrels of oil. (Indeed this story was picked up by the media with a huge outcry over three floating tankers along the British coastline, waiting with the oil. But the hype died off as the rumors couldn't sustain the interest). Many feared that once the maximum capacity was reached, the oil prices could crumble as the market would be flooded with oil.

However, the market never reached the predicted situation. What's more, there emerged room for more storage. In December, Cushing, the world's largest commercial oil site added about 5.2 million barrels of storage capacity to the existing 42.4 million barrels. The maximum storage due to safety precautions is pegged at 41.2 and 43.8 million barrels from 34 million barrels of operable storage space earlier.

It also didn't stand when many analysts predicted that the contango could lead to $10 oil a barrel. The contention- eventually, the stored oil would have to be unloaded. The low demand for oil and the strong dollar added strength to the prediction but now, thanks to the cold wave, the unloading of the 'super contago' has come at the right time.

And, this December the unloading started. According to EIA's Weekly Natural Gas Storage Report released on December 31 2009, working gas in storage was 3,276 Bcf, a net decline of 124 Bcf from the previous week. But, as pointed earlier, due to the cold wave and the surge in demand the oil prices increased.

As often is the case, knowing the opportunity of a price rise the oil companies did increase production. According to a survey, OPEC increased the crude oil production to 26. 965 mbd in December. This was the highest level attained last year, an increase of up to 65,000 b/d from November.

Yet, the fact remains that the unloading hasn't happened on a massive scale as expected. Consumption does seem to have recovered in the fourth quarter. But if the cold wave abates, then there is possibility for the oil prices to see a correction, so investors watch out.