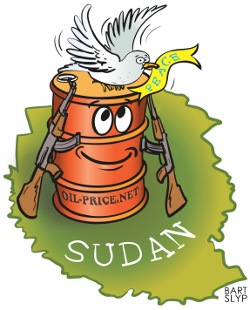 It can't be disputed that the world needs more oil. The IEA has predicted that the global oil demand this year would be 86.3 million bpd, the highest level since 2007. This means that demand, mostly from growing economies in Asia, will increase at a rate of 1.4 million per barrels per day in 2010. So, there is little doubt that the world needs oil, with immediate action on the exploration front. And Sudan is one place where exploration can yield results.

Of course, mention Sudan and it evokes images of refugees, civil war, and Darfur. But Oil?

However, exploration of the region for more oil has been marred by the civil wars. Obviously, peace in the region can usher in some investment and exploration. But, the task at hand is anything but easy. Sudan, with its image tarnished by stories of mass killings and a President (Omar al-Bashir) wanted by the ICC (International Criminal Court), has had two, rather bloody, civil wars.
North Sudan has Arab and Muslim population while the South is occupied by Christians and Animists. This along with language and geographical barrier had led to the civil war, the longest in Africa. The president, Omar al-Bashir has been accused of supporting the pro-government militias of the North. In 2007, the United States imposed sanctions against Sudan for human rights violation and for sponsoring terrorism.

One of the civil wars between the Sudanese government in the North and SPLA-The Sudan People's Liberation Army, a rebel movement in the south-ended with the CPA- Comprehensive Peace Agreement- in 2005. The CPA ended the civil war with promise of a referendum in 2011. It also made provision for an equal share of the oil revenue between the North and South. And, the south relies on this budget heavily. The information on the amount of revenue generated is released by the North.

Last year. UK based Global Witness found that the oil reported by the Ministry of Finance in Sudan had a major flaw. The volume of oil reported by the Ministry was smaller than the volume of oil reported by a Chinese state owned company working in the region, CNPC (China National Petroleum Corporation). The discrepancy amounting to hundreds of millions of oil legitimately belongs to the South. The study "raises serious questions about whether the revenues are being shared fairly," said a statement by Global Witness.
Incidentally, the northern government has a strong supporter in China, while the South is supported by U.S. and other countries. Without audit and the much publicized discrepancy in Sudan's oil sharing agreement, conflict between the North and South could escalate again. And why is this important?
It is as elections are due this year. A report published by ten NGOs associated with the region said that the April election, the first multi-party election after 24 years and the referendum could "inflame violence if not properly prepared for."
In recent developments, Sudan People's Liberation Movement (SPLM) has announced that it plans to boycott all elections in the State of Southern Kordofan. The SPLM is part of the coalition government at Khartoum. The constituency of IEA is important as it has many oil fields. The rebels accuse the government of fraud in the poll registration process. Further, they have also alleged that the government had left out areas which are the stronghold of SPLM in the census of the constituency.
"This means the elections will not be fair ... We will not take part in these elections unless they repeat the census or redraw the geographical constituencies," State Governor of South Kordofan, Abdel Al Aziz Adam Al Hilu told reporters in the capital, Khartoum. The SPLM has also accused its coalition partner of manipulating the oil figures. Though the ceasefire of 2005 still holds, there were more than 2,500 reported deaths from the country. Hence, it's all the more important for the election to come through.

Indeed, fair election and peace in the region could mean:

Clearly, none of this is second to the other. In addition, peace in the region could also bring in investments in the oil field; remember the economy is heavily dependent on oil? The civil war has confined the oil exploration to the central and south-central regions of the country. The potential for exploration and production is great. Sudan needs that, so does the world.