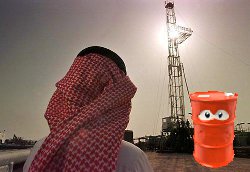 Saudi Arabia has been overstating its oil reserves for decades and will not meet increased demand in 2012.

Predictions for the future? Here's one based on the available pointers: Tighter oil supplies in 2012. In fact, brace yourself, a potential demand surge could, in essence, bring this faraway calculation of next year, nearer by three months. And with it higher price for oil. Last month, the IEA announced release of strategic oil reserves to the market through August. Historically, such a measure is taken during desperate times like war. Well, goes to show how tight supply really is.

Goldman Sachs Group Inc. has, in a recent report, said that oil supplies would become "critically tight" in 2012. Analysts of the bank predict that oil prices could go even higher as spare production capacity and inventories are "effectively exhausted." So, why not increase production, from say, Saudi Arabia? Well, Goldman has also shared apprehension on the ability of Saudi Arabia to raise oil production in the face of eventual scarcity as it believes that Saudi Arabia won't be able to pump as much extra oil as many people believe. On a scary note, the scarcity could occur as early as later this year.

First to the case of Saudi Arabia:

It's no secret that Saudi Arabia, in a desperate attempt to hold on to power, is trying hard to win back its people. After all, the wave of massive protest for democracy did shake the Middle East. So what does it do? Take this: King Abdullah's has announced generous subsidies to construct 500,000 houses for the poor, a friendly mortgage law for the common man to buy property, finances for infrastructure, religious organisations, and for improving the education and health system, a pay rise for workers in the public sector, unemployment benefits, and more education allowance for students. To be sure, it also helps that the country has massive reserves for all the spending, thanks to oil. In two packages, the first announced in February for $36 billion, and the second in March for $94 billion, the ruler is fighting to win back his people. Together, the $130 billion is equal to 30 percent of the kingdom's GDP, or revenues from oil export for eight months.

All this, the IMF predicted, would help Saudi Arabia's GDP growth by 7.5% (Since revised to 6.5 per cent ). With 24.9 percent of the 1,000 billion barrels proven oil reserves of OPEC, the country has the largest oil reserves in the world and is also one of the largest producers of oil, next only to Russia. IEA holds that Saudi Arabia is capable of producing up to 12 million barrels of oil a day, compared to nine million barrels a day in May. Early this year with tensions ranging in Libya, the IEA's executive director, Nobuo Tanaka had said that Saudi Arabia could easily offset any shortfall in production from Libya.

With such huge reserves, in the meeting on June 8, Saudi Arabia, along with Kuwait, and the UAE pressed for increase in production quotas. But, countries like Libya, Algeria, Venezuela, Ecuador, Iraq, Iran, were against the move. Consequently, no decision was reached and the production quotas remained unchanged. Of course, the last thing the Saudi government needs at this point is high inflation due to import of expensive food grain, offset by high transportation charges due to high oil prices. Some indicators to gauge the extent of price fluctuation in recent times: The oil price hit $101.08 (Brent crude) a barrel in February, the highest since October 2008 (In June 2008, they were jogging around $147 a barrel). In June, 2011 they fell to $90 a barrel amid fears of supply disruption due to the closure of Suez canal and Egypt unrest.

Saudi Arabia, essentially, is putting more oil on the market to pay for generous welfare programs, basically "buying out" its population from joining in on the unrest that spread through other oil producing nations. This is unsustainable and will accelerate well depletion. At this point, no one knows the actual reserves of the country, which is dangerous in itself.

The twenty eight member IEA, announced its decision to would release oil, about 60 million barrel, from the strategic reserves this August. This, it said, was to compensate for the loss due to the volatile situation in Libya. It is only the third time since established in 1974 that the IEA has taken such a step. One thing to be noted is that Libya, with less than two percent of the global oil output, isn't a huge player in the oil industry. In real terms, thus, the shortfall isn't going to make any significant changes to the oil supply. From a short term perspective, this move would help lower the price of oil. (The news did ease the oil price, since regained. ) However, in the long term, the reserves have to be replaced, and if the demand rises, this short term measure will push up oil prices.

As a more affluent population in BRICs consumes more goods, fuel usage for transportation and farming also increases. According to a UN report earlier this year, the world population would reach seven billion later this year and increase to 14 billion by 2100, if left unchecked. This doesn't necessarily abide by the math rule of 'the more people, the more pressure on the resources of the planet' theory, as people from the wealthy nations consume more, and waste more. However, what happens when the poor move higher on the economic scale. They have every right to the resources too, don't they? Still, continued growth in BRIC countries means motorized vehicle usage will increase. IMF has, in its update of the WEO World Economic Outlook, predicts a growth rate of 7.8 percent for India, and 9.2 percent for China in 2012 next year. This will have a lever effect: less oil production capacity while the demand skyrockets.

According to Bureau of Economic analysis the US economy has declined by 1.8 percent in the first quarter. The latest U.S. job report showed a weak economic recovery with just 18,000 jobs created in June, and in the revised World economic outlook, IMF has since adjusted the growth for advanced economies to 2.5 percent from 2.6 percent. Indeed, the earthquake in Japan, the resultant disruption in the supply chain, and uncertainty with the varying pace of the economic recovery in the US economy's progress, are some of the reasons for the low demand for crude oil for the first half of 2011.

However, when US returns to faster growth, the Japanese economy bounces back, and Europe recovers from the debt crisis and thus a global recovery, what do we have in our hands, a supply deficit for oil.

In fact, Goldman predicts that the world economy would accelerate in the second half of the year itself, increasing demand. "Prices and returns will rise further later this year and into 2012," a report from the bank said, predicting that Brent crude would average at $120 in six months and $130 in 2012. An EIA report estimates that the oil demand will surpass production by 1.16 million barrels per day this year. The reports also suggests that the oil demand around the world to rise by 1.6 million bbl/d in 2012, a gap of 0.5 million barrels per day (only with increased production). The IMF, for its part, in the updated World Economic Outlook (WEO) for 2011, puts the assumed price for oil based on futures market at $105.25 in 2012. Analyst Hussein Allidina, from Morgan Stanley, said "We remain bullish on oil, particularly in the second half, and expect inventory draws will prompt OPEC to increase production, at the expense of spare capacity".

Of course, by 2012, we'll know which of these predictions come true, though wishful thinking hopes that, somehow, we've got it all wrong. Banks are bullish, you know why. But can we sit back, wait and watch as oil prices spiral, because spare capacity was exhausted?

So, really, did the Mayans predict the end of the world in 2012 or did they run out of space on their calendar? More like what Lady Macbeth said, "Almost at odds with morning, which is which." Superstitions and old wives tales aside, if we look at the oil supply/demand numbers, with close to 7 billion people, we are approaching the planet's carrying capacity. With the oil market set to go through a lot of stress in the coming year, 2012 will surely mark a turning point to remember.