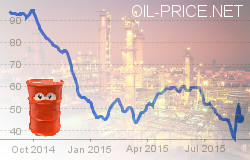 Oil refiners disclosed higher profit margins thanks to lower crude oil prices. Unfortunately this does not always translate into savings at the pump.

Who benefits from lower oil prices?

Lower fuel prices are great for the consumer, but we know that not all of the cost saving of lower crude oil and gas prices have been passed on to the general public. Oil and gas refiners prosper from lower oil prices. Like the rest of the oil industry, refiners' revenues are down, but their profit margins are up significantly.
Refiners are using lower crude prices to widen their cut of the pump price of oil. In other words, the lower price of oil is not entirely passed down to consumers at the pump, instead the difference is enabling refiners to increase their profits.

Crude oil prices have been plummeting since June 2014. The initial fall was rapid and unexpected. This was because production grew faster than projections and demand deteriorated faster than expected, resulting in an excess of oil for sale in the world. Periodic rumor-fuelled rallies in the market since June 2014 have proved to be the result of wishful thinking. Recent events, such as the fall in Chinese growth projections and the end of sanctions against Iran, have given economists reason to downgrade their expectations for crude oil prices.

The lurches in the consensus of opinion for demand for oil over the past year have caused temporary opportunities for price rises at the gas pump. The retail gas industry tends to raise prices quickly when crude prices rise and drop prices slowly when crude prices fall. This variable speed of price movements has given the refineries and the gas stations opportunities to extend their profit margins.

High prices for crude oil from 2010 to 2014 gave great incentives to US explorers to invest in locating new sources of oil and gas. The practice of hydraulic fracturing rapidly expanded the USA's oil production and contributed to the current glut. High sales prices meant that fracking companies could bowl into town, rich with easy money. They sprayed money around the communities they moved into and offered high prices for mineral rights and site access. Those gold rush bonanza days ended in June 2014. The price fall in crude oil did not squeeze frackers out of business, they caused them to be a lot more careful with their money.

Frackers learned to extract more oil from each rig, thus reducing the start up overhead costs of each well. The increased tightness of financing meant the idea of spending millions to get access and buy friends was off the table. A lot of the largesse of fracking has been wiped off the books and so local communities in the vicinity of fracking plays benefit a lot less from a new well, than those lucky citizens reaped back in 2012 and 2013.

Fewer rigs mean fewer workers. It also means that less equipment needs to be sold. Thus, oil service companies make fewer sales, and also require fewer employees to maintain their reduced output. Employment in the oil industry has suffered as plans get put off and exploration is cut back. As examples of this phenomenon, consider Schlumberger, which is the largest oilfield service company in the world. Schlumberger has cut its workforce by 9,000 this year. Weatherford International cut their payroll from 60,000 staff to 46,000 in 2014 and then made a further 5,000 employees redundant in 2015.

By squeezing margins and employing new technology, US frackers have been able to stay in the game. Their success at maintaining profitability at lower market prices has put pressure on conventional producers around the world to reduce profits and slash costs. So, although no producers have gone bust yet, their drive to survive has returned a lot of oil workers to the employment lines.

Unemployment reduces the wages of employed oil workers, because there are plenty of other who would fill the shoes of specialists who walk off site rather than reducing their fees. Thus, the oil industry's workforce has become a major loser in the low crude price era.

Middle Eastern OPEC members are said to be driving the price fall in order to squeeze out their fracking rivals. This strategy has lost those governments the income they need to keep their economies running with very little alternative sources of income. They must now subsidize their governments with their foreign currency reserves. Drawing down bank deposits means there is less money available for banks to lend, thus squeezing credit and reducing global economic expansion further.

As Arabian governments start to draw down their savings, they will be forced to cut government spending. Oil producers in the Middle East buy off their citizens' ambitions for democracy with petrodollars. Of course when the money runs out, instability will increase even further in those countries.

The recorded fall in the gas pump price of $1.20 per gallon is a definite benefit to the American consumer. Under normal circumstances, economists would expect this saving to boost spending on consumer goods. However, this time around, people don't seem to be spending their gas savings on buying larger gas guzzling vehicles. This may be because the trend towards energy efficiency is finally starting to lodge in the American psyche. Recent memory of economic uncertainty also seems to have made the average American nervous about spending.

An increasing fraction of American consumers has decided to pocket that saving and pay down debt, rather than splurging on household gadgets or luxury vacations. Therefore, families will also be long-term winners from the crude price fall. Parents now rate financial security over comfort spending.

By far, refiners have been the biggest winners of the crude oil price downturn. This position is reflected in the stock valuations of refining companies. The stock price of the refiners, Valero Energy went from $43.76 per share in November 2014 to $70.43 in August 2015. This rise was mainly due to the company's surge in profits. In June 2014 the business reported a profit margin of 1.68 per cent. By June 2015, that figure had risen to 5.38 per cent. Refiner Tesoro Corporation has risen in value from $56.20 in June 2014 to $102.08 in August 2015.

As an illustration of the increased margins the refiners experienced, figures from Total S.A. show a margin of $3.75 per barrel in the final quarter of that year. Profitability took off through 2015 and the company reported its refining margins at $6.73 in the first quarter and $7.36 in the second quarter.

The oil price fall was a symptom of an excess of production. As wells kept pumping oil into a saturated market, stockholdings rose. This resulted in a shortage of storage capacity, and so the price of storage rocketed. Storage fees rose from 20 cents per barrel to 80 cents by March 2015. The shares in Vopak NV, an oil storage provider, rose by 33 per cent between August 2014 and April 2015. Kinder Morgan rose by a similar margin and rival storage companies also rose in value over the same period.

There are laws in place to protect against profiteering. These laws prevent gas stations from overcharging for gas during crises and natural disasters, such as tornadoes. Shouldn't they be applied? By definition, a business can be accused of profiteering when it raises prices during awar or emergency. Although the current oil price is a matter of global economic importance, it cannot be defined as a crisis or an emergency.

In fact the pump price for gasoline is slightly cheaper than it used to be a year ago so the prices were not even raised. This is called capitalism, not profiteering and is central to a free market economy. This is the American way. If you too want to benefit from this situation you can -- buy refiner or oil storage stocks.

Profit derives from the gap between what it costs to produce something and what someone is prepared to pay for that product. No one considers himself a charlatan if he sells his home for more than he paid for it. That profit probably came from nothing more than the increase in the amount that buyers were prepared to pay and not from any decoration or maintenance work performed by the seller.

Demand for gasoline is inelastic, but supply levels can vary widely. Shortages of crude oil cause the price of crude oil to rise and excess production causes the price to fall. Thus, in the current market, refineries can force the price of their raw materials down and they do not lose sales by maintaining sale price levels. The crude oil market is currently in oversupply, but the automotive user can't profit fully from that price-depressing factor, because they can't pump crude oil into their vehicles. This is the classic formula for profit.

The intermediary sectors of the oil industry - transport refining and tanking - usually profit most during a crude oil price downturn. This is a common pattern noted by economists. As the gatekeepers to the consumer market, this sector gains power when producers need to compete to sell, and thus they are able to force down their input costs.

Logistics companies usually integrate the functions of refining, transport and storage, because that gives them a win-win situation. Producers that are prepared to drop their prices will sell their output to the refiners, who then have lower costs. Those that hold out for better prices need storage, thus the tanking divisions of the logistics companies can raise their prices thanks to excess demand for their services.

Oil production is slow to turn around. An oil well takes years to plan and established shipping agreements are hard to break. Over time, producers will reduce their output and put more effort into finding other regions in the world where they can send their crude oil. These activities will eventually bring supply and demand for crude oil back into equilibrium.

Although demand for gasoline is fairly fixed, long-term changes in the fuel market will eventually have an effect there too. The cost of different types of fuel is a major factor when families and businesses decide to purchase vehicles and heating systems. An enduring lower oil price will eventually increase demand for the product as furnaces, trucks, buses and cars get replaced. Higher demand for gasoline puts pressure on logistics companies to source more crude oil, which returns some power to the crude oil producers and reduces the negotiating power of refineries. Similarly, when demand rises against falling availability, the need for storage falls and logistics companies have to start pricing their services competitively in order to maintain throughput in their high-cost facilities.

The share prices of tanking giants Vopak NV and Kinder Morgan peaked in April 2015 and then started to fall. The excess profits to be made from storage already seem to be petering out. The end of the imbalance in the oil sector seems to be within view for stock investors, so margin gains of the logistics companies will now start to decline.

Different oil price conditions generate larger profits at different points in the supply chain. This year, and for at least another year to come, the processors, transporters and retailers have their turn to ramp up their share of the sales price. In other years, oil brokers make all the money and at other times oil producers can name their price. No matter which particular stakeholder has a periodic opportunity to profit, there is one organization that will always profit from crude oil and gasoline - the government.