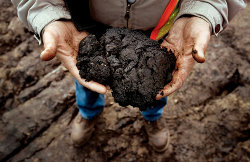 The picture above the ground: The Boreal forest of Canada, a unique blend of pristine forests, water bodies, and wet lands.
The picture below the ground: Tar sands, a source of oil, spread across 138,000 km2 of land. About 4.3 million hectares of the said forest has tar sand deposits.

And, one or rather both the pictures are about to disappear: it's not rocket science to discern that tar sands could be extracted only after mining the forest. For what? Well, tar sands are the source of liquid fuels- the dirtiest source of fuel on the planet, at present. Naturally, it comes at quite the cost to the environment, spoiling-you name it- the land, water and air. Up until recently, extracting oil from tar sands was very expensive, technologically difficult and complex. But advancement in technology and high price of oil-above $80 a barrel- has made it possible to extract oil with profit.

Needless to state, now we have companies flocking to get a piece of the cake, or should we say tar sand. And for good reasons, too: In 2008, production from Alberta tar sands was at 1.31 million barrels per day and Oil sands are the largest source of crude outside the Middle East. Further, Canada is politically stable and has an investment friendly government.

So, in one of China's largest investment in North America, the state owned Sinopec Oil Company is all set to buy a 9% stake in Syncrude project for Canada's oil sand. The oil company paid the US based ConocoPhillips $4.65bn for the stakes. Syncrude, is the largest project in Canada for tar sands, operating since the seventies, pumping around 350,000 barrels a day and accounts for more than 13 percent of Canada's oil output. The deal is yet to be approved by the respective governments in China and Canada. Analysts were expecting Canadian Oil Sands Trust, the largest owner of the Syncrude project, to buy the stakes of ConocoPhillips. But Sinopec clinched the deal, and by more than $2bn the expected cost, at that. Other companies associated with the Syncrude project are Suncor Energy Inc, Imperial Oil Ltd, Nexen Inc, Nippon Oil Corp and Murphy Oil Corp.

This is the latest in a series of investments, to the tune of billions of dollars, done in the energy sector by China. Demand for energy is growing in China with a booming economy-the demand fast-tracked by 28% in January this year compared to the same month last year- and the country is leaving no stone unturned in its quest for oil. In fact, last year, Sinopec bought a ten percent stake in the Northern Lights project and spent around $7.2bn for Addax Petroleum, a company with stakes in oil fields in West Africa and Kurdistan. In 2009, Athabasca Oil Sands Corp. (AOSC) divested 60 percent of its stake in Alberta oil sands project to PetroChina International for $1.9 billion. But the latest acquisition is, so far, the largest from China in oil sands.

Oil sands-tar sands or extra heavy oil-is a mixture of sand, clay, water and a heavy, dense, viscous form of petroleum called Bitumen. This Bitumen has to be subjected to expensive and wide variety of treatments to produce fuel. Oil sands are found in many countries including Venezuela, Russia, the US and Canada. In fact, Canada is the largest supplier of crude oil to the US and has the second largest reserve of oil after Saudi Arabia. Alberta oil sands produce crude oil rich in sulphur, and the place has almost 85% of the world's natural bitumen. The largest deposit of which is Athabasca oil sands. Some in-situ methods used to in the mining operation are cyclic steam stimulation (CSS) and steam assisted gravity drainage (SAGD). And in-situ extraction uses twice the energy as strip mining.

Two decades ago, the Exxon Valdez oil spill occurred in the Prince William Sound, Alaska, when about 10.8 million gallons of crude oil spilled into the sea. And according to reports, the effects are still felt with Harlequin ducks living in the area showing effects of long-term exposure to the oil. And the Boreal forests are home to many animals like wolves, lynx, bears, and woodland caribou; to about thirty percent of North America's song birds and three to five billion land birds, including migratory ones. Last week Europe's largest oil company BP, beat a shareholder rebellion- co-ordinated by FairPensions and Co-operative Asset Management with support from WWF-UK, - over environmental, financial and social risks associated with BP's oil sand project in Canada. The advance votes showed that about 85% had voted against the resolution. The resolution will be discussed at the BP AGM and the company is expected to make a final decision on the oil sands venture by the end of this year. Though the resolution failed, it did succeed in bringing to the table BP's plans for tar sands projects. The oil company, for the first time, disclosed information on the company outlook on demand for tar sands oil. It also furnished details on regulations the company had planned while deciding on the proposed joint venture between them and Husky energy for the Sunrise project. The company contents that the extraction process in the Sunrise project was less damaging than the older methods. The project is expected to produce 200,000 of oil a day by 2012.

The Chairman of the BP Carl-Henric Svanberg said the vote was "not about winning or losing". He added that "This resolution raises perfectly legitimate concerns" I understand the concerns, but I disagree with the analysis. And that "The decision to move into the sands is a strategic one " most analysts think it is a stretch to think we can meet future energy demands without fossil fuels, we will need at least 50 million barrels a day of new oil.

BP and Shell are saying that they would extract oil from tar sands in a responsible way. Shell states that the greenhouse emissions could be reduced using carbon capture and proper storage methods. Greenpeace climate and energy campaigner Melina Laboucan-Massimo said "BP's involvement in the toxic tar sands industry exposes the hypocrisy behind its carefully crafted image of being beyond petroleum". Further adding that, "With its stake in the tar sands, BP more accurately stands for 'Broken Promises' and can't claim any longer to be 'Beyond Petroleum'."

Strangely, the IEA has commended Canada for its commitment to 'increase the share of clean energy in electricity supply by 2020.' Said IEA Executive Director Nobuo Tanaka, "the goal to increase to 90% the portion of Canada's electricity needs that are provided by carbon-free sources such as hydro, nuclear or wind power by the end of the decade is progressive and ambitious." But, really, how's that possible with blatant destruction of forests?

It would be unwise, if not silly, to expect investors to be ethical and abstain from the project. However, there is, be assured, a way to save the forests. If the government imposes higher charges for carbon dioxide emissions, it would cut into the profit. This looks like the only possible way to save the Boreal forest. For, should the Canadian government dirty its backyard at the cost of its wildlife just to supply oil to the energy thirsty US? The US is not going to reclaim the land, anyway.

The bottom-line, as oil-price.net has always maintained, is more investment in renewable energies and reduced consumption of oil. As for Canada's tar sands project, spirited opposition is the only way to prevent an environmental disaster.