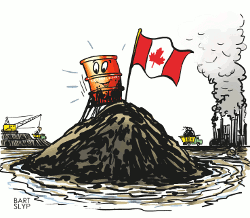 In order to ascertain whether Canadian tar sands are profitable, we need to understand exactly what they are. Tar sands are mixtures of naturally occurring clay and bitumen. Bitumen is a sticky tar like form of petroleum. However, bitumen is extremely thick and heavy and must be diluted before it can flow. As a consequence it cannot be pumped directly from the ground in its natural state. In order to extract oil from tar sands, strip mining, or open pit techniques are used. The tar sands need to be heated and chemically treated in order to extract the oil. Countries where tar sands are abundant include Canada, Venezuela, and Eastern Utah in the United States. In fact forty percent of Canada's oil production comes from tar sands.

Two tons of tar sands are required to produce one barrel of oil. Approximately 75% of the bitumen can be recovered from the sand. Profit margins are limited by the fact that the tar sands cannot be processed as quickly and without chemical processing. Saudi Crude Oil, by comparison can be pumped directly from the ground. The extraction and refining processes related to tar sands cost companies mining tar sands in Canada approximately $27 per barrel. However, despite the extraction costs of oil from tar sands, in today's current market, with the purchase price of oil at $80 per barrel, the production of petroleum from tar sands is still an extremely profitable affair for companies mining Canadian tar sands. Yet, we are only addressing the question of economics. Once we turn to the environmental costs of the tar sands industry in Canada, events take a sudden turn for the worse.

The extraction process involved in separating bitumen from sand and clay releases three times more greenhouse gas pollution than conventional oil extraction. Environment activists are signalling the alarm bells. This is because not only does the extraction process increase significantly, greenhouse pollution, but also because it wreaks havoc with wildlife and local forests. Environmental activists are now labelling Canada's tar sands industry, "Canada's dirty secret." What is particularly alarming is that tar sands underlies more than 140,000 square kilometres of Canada's forests. Current plans in progress include projects to extract tar sands from another 3000 square kilometres of Canada's forests. Yet, Canadian forests account for one quarter of the worlds remaining intact forests.

Although those who reap the benefits from mining tar sands are deriving immediate profit, the legacy they are leaving is an environmental disaster.