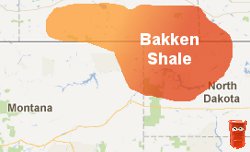 Readers of oil-price.net have often wondered why the US isn't self-sufficient in oil, that is, in spite of the perceived abundant reserves. They may have a point, just so. Let's take a case to illustrate the oft repeated gasp -Why do we import oil, still. North Dakota.

North Dakota is the second largest producer of oil in the US, next only to Texas. In the last two years, oil output from North Dakota more than doubled, multiplied by five since 2006. With over 600,000 barrel/month, North Dakota now supplants Alaska in oil production. With the insatiable demand for oil, North Dakota satisfies three percent of the US oil consumption. It also accounts for ten percent of all US oil production. For more promises of better things in the oil field, there is Bakken.

Bakken, to explain it further, is the largest oil formation discovered in the last forty years. The estimated amount of oil in the Bakken Shale Formation is said to be 900 billion barrels. For a comparison, if you may, Bakken has more oil than the entire Persian Gulf (747 billion barrels). According to the U.S. Geological Survey, this oil formation is located in the Williston Basin, and is the largest 'continuous-type' oil accumulation ever assessed, stretching from Canada into North Dakota and Montana. Appetizing, isn't it? More so, if one considers the country's dependence on crude imports.

Let's take a brief look at the import scenario. In May, crude imports surged to 8.909 million barrels a day, according to reports from the Energy Information Administration, a 3.7% increase from April, and highest since October 2011- in spite of the rising contribution from North Dakota. Canada is the largest supplier of crude as of May (2.378mn b/d) with Saudi Arabia coming second (1.465mn b/d) and Mexico third (at 956,000 b/d). Of course, the consumption of oil in the country rose from a year ago too. According to EIA, the oil demand in the US climbed to 18.707 million barrels per day in May. This is 1.87 percent more than the projected estimate. Just reinforces the already known fact- the need for oil.

Now, what's so complex here? We have already established that there is enough oil reserves and that the need for oil is only increasing, so why not just 'drill it' - as our readers keep saying. That simple? Probably not. Bakken has oil, no doubt. The catch? Oil is 15,000ft deep in the Bakken Shale Formation, only a fraction of which is recoverable with today's technology. Yet, recoverable it is, and hence the oil boom- Bakken oil boom as it has come to be known. The technology used, you may have heard: Fracking.

Whether as plot in novels or at the heart of conspiracy theories, fracking has captured the popular imagination, a synopsis for any future doom associated with earthquake in the world.

And, what is fracking? It's short for Hydraulic Fracturing, a technique used to extract gas from rock formations. In this technique, mining companies drill into the rocks injecting sand, water and chemicals under high pressure to crack the rock and create fissures (called veins) in the layers underground. The fissures created by these fracking fluids allow the recoverable natural gas or oil to escape and be collected. If not for fracking many of the reserves would still be untapped. Fracking, it has to be said, is not without a series of serious drawbacks. The technique used, if you read above, is like a mini Earhquake. And, we are yet to know the effects of fracking in sensitive zones. For that matter, any place on Earth will always be a sensitive zone. Earlier the smaller quakes in Oklahoma, Colorado and Arkansas have been linked to hydraulic fracturing.

According to a report by the National Research Council, hydraulic fracturing is unlikely to trigger large earthquakes. However, the study does point to the risk of man-made seismic activity when waste water from the drilling is injected back into the ground. "While the general mechanisms that create induced seismic events are well understood, we are currently unable to accurately predict the magnitude or occurrence of such events due to the lack of comprehensive data on complex natural rock systems and the lack of validated predictive models," the study reports.

The report also notes that only two instances of tremor- one in Oklahoma of 2.8 magnitude and another in England of 2.3 magnitude- are attributed to fracking. Hold a minute. What? Read again: The report suggests that hydraulic fracturing has been confirmed to cause 'seismic events in 'a very limited number'. (The U.S. Geological Survey too acknowledges seismic disturbances with the waste water injection.) Well, minor or major, it's hardly a source of comfort to note that fracturing can cause earthquakes.

It doesn't stop with earthquakes. Fracking in the new veins in the ground allow water to come in contact with oil and become contaminated. Naturally, the EPA and watch groups are up in arms against fracking as it pollutes the air and contaminates the soil surface. As the long term risk to underground drinking water and to public health is no laughing matter, many countries, unsurprisingly, have banned the practice.
On the flipside, it's one of the important techniques that make the North Dakota dream possible. If not for fracking, oil in many formations would be too expensive for a conventional oil drill. If many people still support fracking, in spite of all the drawbacks, it's because of the oil potential-an important factor to reduce dependence on imports. Together with Horizontal drilling, fracking has made the North Dakota dream a possibility. Both the techniques are expensive, but the oil companies can afford, what with the oil prices averaging nearly $100 a barrel, and they are rushing in. Of course, cheap oil can bust the boom in no time. Well, that doesn't seem realistic in the near future, does it? Another equally potent dampener would be unnecessary rules-this doesn't mean that the oil companies should be given a lease to pollute as they wish. They should be made accountable for the waste water pumped, any destruction caused.

Indeed, fracking isn't the only hurdle in North Dakota. The oil revenues have climbed to $839 million in 2011, with expected revenue of $2 billion in the next two years. The population has grown phenominally-an increase of 13 percent from 2009 to 2010- but the infrastructure lacks behind the boom. The local power demand has surged even as the power companies struggle to provide. And new wells demand more power. Also, there's a lack of pipeline in the region, so oil is transported by trucks and trains. Part of the charm of North Dakota is the laidback rural ambience it's been known for. That is definitely changing reminiscent of industrial revolution or the frenzied gold boom of yesteryears. The infrastructure, though, hasn't stepped up to the challenge. The rural two lane narrow roads, not envisaged to accommodate the gargantuan trucks, suffer the most. Rebuilding the roads ravaged by the huge trucks would need massive input of funds, in fact, more than the present oil revenues. North Dakota also has problems of traffic congestion, inflation and housing crunch. It doesn't stop there. No way. The crime rate is increasing, especially thefts and burglaries, in the said oil zone. In Williston the crime rate has doubled in the decade starting 1999. So what is the next step? Slow down, add in more regulation and kill the boom? The trick is to deftly manoeuvre the resources and not kill the goose for one egg.