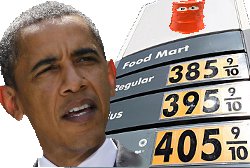 Some advice from oil-price.net on a suitable energy policy for the next four years

Congrats, Mr. President. We hope the second term, you know, without the burden of having to face another election, doesn't make you complacent. You must be wondering why we - dealing predominantly with oil and its cousins - are writing to you. Well, we'll come to that. In March you said, "We can't have an energy strategy for the last century that traps us in the past. We need an energy strategy for the future – an all-of-the-above strategy for the 21st century that develops every source of American-made energy." Well said, but then, all strategies are planned for the future. Who can, Mr. President, plan for the past? (Er, not even you, the most powerful man on the planet). Let's leave it there and talk about:

Well, it isn't so 'cool' to talk about dirty coal as, say, nuclear, gas, wind or solar energy. But, we have our reasons. Frankly, we wanted to talk exclusively about oil. With the layoff of 160 workers by Murray Energy that would have been a travesty of whatever we were to write.

There are but a few advocates for coal as a source of energy. Indeed, there ought to be no place for a polluting material as filthy as coal on the planet. No one of sound mind would support coal as THE Yet. fuel, remember, we are talking about a region with the second largest 'recoverable' coal reserves in the world. Electricity and coal, Mr. President, are still bedfellows. According to EIA (Energy Information Administration), coal accounted for 42 percent of the electricity generated in the US in 2011. 'Clean coal' as you say is- oh, come on. You think putting in severe restrictions, like control on the mercury emission, will curtail coal based power plants. In fact, they may. Already, export of coal is on the increase and India might well become the second biggest consumer of coal in two years. Soon, back home, the Environment Agency will come up with a new set of rules for power plants. So, all we say is 'slow down'. The best thing to do is not do anything. As it is, cheaper gas will naturally burn down coal. Surely, you'd have heard of the cries to avoid mixing ideology and policy. As if it were that easy. There are, according to the latest coal report of the EIA-again - 91,611 employees in the coal mines of your country. Let's shed a tear for them.

Well, things are looking up. We are not saying this with an ironic twist, as you suspect. We do know that oil and gasoline prices are, well, determined by market forces. Still, you can take heart from the recent positive news. Like, US could become the world's biggest oil producer, according to the latest World energy Outlook released by of IEA (International Energy Agency), by 2020. (Still a bit too early to ask: where is this Saudi Arabia?) In this route, the economy will move northwards too. IEA says that the energy map of the world "is being redrawn by the resurgence in oil and gas production in the United States." Just four years ago, the news was filled with global warming, energy scarcity, job losses and high oil prices. Now, there is plenty of (potential) oil, and eh, potential jobs. Told you: good news. From 8.1 million barrels a day in 2011 to 11.1 million barrels a day in 2020 is the projected production. That's too good, isn't it? Sure enough, you may not have to engage the Middle-East through the prism of oil. You don't have to rely on expensive imports. The US could also, now, stop invading countries for oil (more on this later). All this is exciting news when seen from the 'fiscal cliff'. However, you may have to overcome the 'fracking revolution.' There's one underway-yes. For the US to become the leading producer of oil in the world, it has to rely on fracking to extract oil and gas from shale. Fracking is the process where water, sand and chemicals are pumped into the ground at high pressure to blast the rocks/shale to extract the fossil fuels. Fracking causes massive pollution to soil, air and water, hence the protest against the process. In spite of new technologies- like hydraulic fracturing and hydraulic drilling- that have helped recover previously inaccessible hydrocarbons- shale gas extraction retains its polluting rank. Bit tricky: if you have to come true on your promise of cutting oil imports by half in 2020, you'll have to rely on shale gas, Mr. President. In a similar situation, your predecessor tried to bring in biofuels, if you care to look at history. With high grain prices, that effort is losing its sheen. Here's a thought- how about improving the infrastructure for exports and better pipelines to the grid? Indeed, we are talking about the Keystone XL pipeline, a necessity as the $20 difference betwen a barrel of WTI crude oil and Brent crude oil keeps rising for the world to see.

Also, would you put an damper on subsidies given to the oil industry? Just so that the oil companies will pass it on to the consumers, you know. Arguably, higher oil production doesn't mean lower oil prices as oil extraction in the US is still expensive. Several other industries receive subsidies with strings attached. It's only fair that oil subsidies come with somewhat of a guarantee for US tax-payers who subsidize them.

After Sandy, the climate change is back in focus, as it should be. As it turns out, we'd like to point out how things were in 2008 when you were quite passionate about the whole issue. In your first term in office, the bill to 'cap-and-trade' to curb the noxious carbon emissions had a rather premature death, and the solar manufacturer, Solyndra declared bankruptcy much like those greedy bankers. Still, the stimulus given as subsidies to wind, solar and biomass were unprecedented in the history of the US itself. An extension to the subsidies, perhaps? Why, even if you want to hand over tax breaks to the renewable sector, we understand, you'll need congressional support. Who said 'green energy' was easy? The solar manufacturers are facing a massive Chinese challenge and cheaper gas is giving stiff challenge to renewables. So, a fillip to renewable energy could help US become the world's second biggest source of power generation by 2012, says the IEA, as renewables are 'indispensable part of the global energy mix'. Hey, we do love solar and wind energy, and if the focus shifts to them that would be a mighty step forward.

Would you impose stricter fuel efficiency standards for vehicles? Then again, this is going to put pressure on the US refineries. How, you may ask. With stringent fuel standards, the oil demand could fall, you should be aware. As it is, oil consumption dropped in the U.S. last year. On the other hand, global demand for oil is expected to increase to 99.7 million barrels a day in 2035. Well, as you know, the US refineries aren't the best in the world and some of them burnt billions to upgrade and refine heavier crude from imports. With more supply, oil stagnation comes into play. Complex, but there's a solution, and here it comes: the policies do not support crude exports. So, why not lift the crude export ban?

You may understand, now, why we made a point to write to you. We've been saddled with you for another four years. You have arrived at the white house in spite of unfulfilled promises, sluggish growth and record unemployment figures. Of course, we are writing to you assuming you have greater power to make decisions in the energy sector. Of course, we realize that the House of Representatives is tethered to the hands of the Republicans and that you'll be battling budget deficits but if this term of yours is devoted to regulation, more regulation and higher energy costs, that would be such a remarkable pity.

Before we sign off, one more plea (please). When religious extremist threaten to disrupt everything associated with oil, do take their threat more seriously, e.g. not pandering to Iran, Saudi Arabia, Sudan, in other words, militants, dictators, belligerent Islamists and kings the world over. Pandering to those guys is submitting to extremism and encouraging their behaviour. To know more on this issue, do read our previous article.

« Previous
Takeover of Oil by Militias
Next »
American Oil Revolution