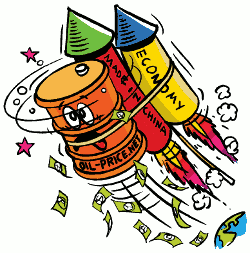 Loss of elasticity in the oil price.

Crude oil prices have surged to year high recently, as the economy is showing its first signs of recovery. Mark my words: the economy is not booming, far from that. There are however some signs that the worst part is behind us. But a surge in oil prices like we are witnessing seems out of proportion with today's growth, stagnant at best. This is due to the lack of elasticity in crude oil pricing. Let me explain the principle of "elasticity":

Up until recent years when the world's need for oil would vary with cycles in the economy it was merely a matter of turning a faucet, thus pulling more or less oil out of the ground from existing wells to satisfy demand, with little effect on the price. This is why we talk about elasticity.

But right now the rubber band is short, tense and overstretched already. In fact it looks more like a tight rope than a rubberband. You see, in months past when oil was cheap, oil companies could not justify costly deep water exploration projects so these were canceled. Because of current lack of new oil and because the old oil fields are declining, it is not possible to increase production as fast as demand climbs, even though the current change is mild. There is no elasticity, oil demand and oil price are tied together with a tense overstretched rubberband acting like a rope.

Of course as petroleum prices go up, oil exploration ventures will resume but these are long-term projects. Much like it takes nine months to make a baby no matter what, it sometimes takes several years for a new oil field to start producing. Short term this bodes well for oil exploration companies such as Transocean. Expect their business to grow for the next few years as oil companies scramble to meet demand.

Next »
Oil supply crunch and the world.