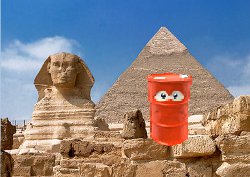 Riots over high food are snowballing through the Middle East, and the latest theatre of these riots, Egypt, has Western Powers worried. Very worried. Never mind a democratic regime, free elections and freedom of speech. The real worry here is oil, or the control thereof.


Egyptians are starving because Egypt is past Peak Oil

Egypt's oil production peaked in 1996 at 922,000 barrels/day. Since then, Egypt's oil output has declined an alarming 26%. Moreover this decline is amplified each year as the rate of depletion in existing wells accelerates. As in most middle-eastern oil exporting nations, oil accounts for the quasi totality of this country's exports and economy (not a single Egyptian company is listed on the SP500). Egypt which used to be self-sufficient in all basic food groups back in the 1960s now imports most of its food and the state has relied on oil revenues to subsidize food prices. But as Egypt's post-peak oil production plummets, so do food subsidies and food prices surge. Unlike the USA which can and does print more dollars sold to the Chinese to counter its trade deficit, Egypt cannot find buyers for the currency it prints and double-digit inflation is the norm. As food prices increase worldwide, this increase in price is multiplied in food importing countries like Egypt with a weak currency. But the real reason why these riots are so publicized in the West lies in the disastrous consequences they may have for the Global Oil Supply.

Nearly 3 million barrels of oil transit daily through the Suez Canal, as much as Canada's daily output, making it one of the world's most important oil routes. The tankers ferrying this oil are coming from Saudi Arabia, Kuwait and neighbouring producers and are for the most part headed to US shores and to a lesser extent Western Europe which also relies on the North Sea and Russia for its oil supply. Unfortunately Egypt is the country which controls the Suez Canal and as the food riots gradually take the shape of a revolution, the future of the Canal becomes a million dollar question. As it stands, the possibilities are endless, among which here are some likely scenario to ponder:

A labor strike may cause a temporary transit disruption through the canal. Not good news for Egyptians as the food Egypt imports also comes through the canal. For a newly established government eager to prove its legitimacy, the most populist thing to do would be to significantly raise the Canal's Tariff: The tax levied by Egypt on all oil flowing through the canal. This would be in effect a tax on non-Egyptian oil to subsidize Egyptian food. As a result oil prices would soar worldwide.

Any temporary interruption in the Suez traffic would undoubtebly cause the US to open its 727 milion barrel strategic petroleum reserves to avoid domestic fuel shortages. A military intervention may be triggered in advance of a prolonged interruption to take over, secure and operate the Canal. It is in both the US and Egyptian national interests to keep both oil and food transiting securely through the canal. In 2010, Egypt was the second largest recipient of US military aid with 1.5 billion dollars.

Food Riots: the shape of things to come

The pattern is identical across Middle Eastern oil exporters: most have either or are close to reaching peak oil and far from self-sufficience, they rely mostly on food imports subsidized by oil to feed their people. Decades of relying on easy oil revenue are culminating into a tragic finale. The release by Julian Assange of some key Wikileaks cables a month ago demonstrated that many high ranking officials in these countries are corrupt and feel no sympathy for their starving constituents. It also became evident that these same officials feared their people, in other words, the emperor wears no clothes. This has set the foundations of an unprecedented revolution throughout the Middle East, from which the West is struggling to make sense.


Will fundamentalists take over Egypt?

That is the two million dollar question. Unfortunately, democracies do not have a very successful track record in this part of the world, mostly due to external influences (For example, Iran 1953). What, in the case of Egypt, was originally a grassroots movement, coordinated via Facebook and Twitter, inspiring all generations and genders from all walks of life took a decisive turn when the Egyptian government hit the "kill switch" on the internet. Since then Mosques have become the only forum from which riots and demonstrations have been coordinated and, as the saying goes, there is no free lunch. Expect the Muslim Brotherhood party to gain seats in the new government.

« Previous
Is Shale Gas The Next Cradle of Energy?
Next »
Russian Oil A Strategic Alternative Amid Middle-East Turmoil