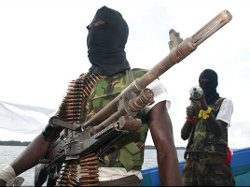 What's in a name? Niger or Nigeria will be in a better position to answer this question. If not anything the confusion in the name pushed oil prices to $80 a barrel last week. How? There was a coup in Niger and traders hustled to buy oil, mistaking Niger for oil rich Nigeria.

On February 18, a coup took place in the West African country, Niger. Armed soldiers stormed the presidential palace in Niamey, the capital of the country and kidnapped the President of the country Mamadou Tandja. The coup was orchestrated by a soldier named Colonel Adamou Haroun. He was aided by another Colonel Djibril Hamidou. This is the third coup in the country since the 90's.

In dramatic style, the soldiers declared on TV, the suspension of the constitution and all the institutes associated with it. Colonel Goukoye Abdul Karimou, read a statement on behalf of a group called Supreme Council for the Restoration of Democracy (CSRD). In the statement he appealed to everyone to have faith in the group's ideas which "could turn Niger into an example of democracy and of good governance".

The coup wasn't entirely unexpected. President Tandja came to power after the election in 1999. He was supposed to step down on Dec 22. However, he chose instead to change the country's constitution last year to stay on. The move enabled him to stand for a third time in office, and with more powers without election.

The fifteen nation West African regional bloc, ECOWAS (Economic Community of West African States) reacted by suspending Niger. The US terminated non-humanitarian aids and cut off trade benefits. The US state department spokesman Philip Crowley said "President Tandja has been trying to extend his mandate in office. And obviously, that may well have been, you know, an act on his behalf that precipitated this act today". African Union chief Jean Ping condemned the military coup in Niger and said he was following developments "with concern".

The reaction from Nigeria, coincidence or not, does take pains to differentiate between the countries. According to a statement by Senior Special Assistant to the Acting President on Media and Publicity, Mr Ima Niboro, the acting President of Nigeria Dr. Goodluck Ebele Jonathan has expressed deep concern over reports of shooting in Niger's capital.

Meanwhile, Colonel Djibrilla Hima one of the leaders of the coup said that their group would hold election too. The plan, he said, is to hold elections once the situation has stabilized.

Niger has in recent years attracted billions of dollars as investment in oil.

Thus, though Niger isn't a major player in the oil business, the markets reached on hearing news of the coup. Tom Bentz, analyst at BNP Paribas Commodities said, "Markets took off at around the same time a Reuters story came out about gunfire erupting in the Niger capital in an apparent coup bid, mistaken by many as being Nigeria".

To be fair, other factors too contributed for the increase in oil prices-tension of Iran's nuclear program, weaker dollar and the report of EIA on heating oil supply falling by 1.4 million barrels. However, among the factors, the name confusion was the most important reason for the immediate oil price rise.

Yet, the fact remains that Niger is yet to produce oil for the world market.