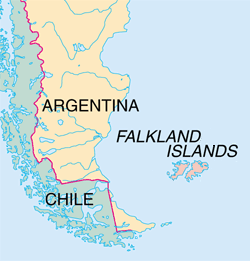 Oil War in the Falkland Islands

This could be the script of any Hollywood blockbuster: The recent spat between Argentina and the UK over oil in the Falkland Islands. For, there is a conflict, two or more protagonists, oil, money and drama.

The diplomatic battle started hogging the headlines as Argentina began criticizing Britain for its plan to drill for oil and gas in the waters north of the Falkland Islands. The Argentine foreign ministry in a statement said the government "firmly rejects plans of the United Kingdom to authorise operations of exploration and extraction of hydrocarbons in the area of the Argentine continental shelf under illegitimate British occupation".

For now, Argentina says that it would blacklist the oil exploration companies working in the region. "It's not accidental that the oil companies involved are British, that is to say, the only ones that can really believe the chimera that the UK is peddling about the alleged legality of these commercial operations", said official Argentine sources.

On the other side, British reaction has been subdued. The Financial times reported a UK diplomat as saying that the UK Prime Minster, Gordon Brown was anxious to "avoid military confrontation". A spokesperson for the UK embassy in Argentina said "We have no doubt about our sovereignty over the Falklands Islands and the surrounding maritime area." And that "The Falkland Islands government is entitled to develop a hydrocarbons industry in its waters and there is a long-standing policy to support this".

Argentina says that Britain continued to ignore the UN resolution to renew dialogue on the sovereignty of the South Atlantic islands. In 1995, both the countries signed a joint declaration to cooperate on off shore oil explorations around the Falkland Islands. In 2007, Argentina voided the 1995 oil and gas exploration declaration with the UK, which was on suspension for five years. Meanwhile, the UK wants to extend its rights to areas surrounding the islands.

Why the waters around Falkland Islands are important?

The reason is simple to state: The areas around Falkland Islands are said to have one of the world's largest reserves of oil, mainly in the north basin. There are reserves in the South and East of Falkland islands as well. The British Geological Survey estimates the oil at about 60 billion barrels. The hydrocarbons in the basins were discovered in 1998 itself by companies like Shell and Amanda Hess. But soon after oil prices fell-$12-15 per barrel- and with it ended the efforts to drill for oil.

But now that technology, skill set and oil prices have improved, the companies are able to contract rigs for the exploration with improved resources. Ben Romney, a Desire Petroleum spokesman said, "With the rise in oil prices and the worldwide search for new oil and gas services, it has now become more than commercially viable for this work to begin". The oil well costs about $25million-$30million in the north basin where drilling depth reach 500m. It would cost $30million-$35million in the south basin as the depths are higher at 3,000m.

Last June, Phyl Rendell, Falkland Islands Director of Minerals and Agriculture had this to say about the South American influence, "Their political stance and restrictions on our movements are harmful to our economic development. And we are striving to develop our economy with that threat over us".

Indeed, the potential benefits of oil are huge:

In later developments, the diplomatic salvo between the countries reached a crescendo with Argentina preventing a ship from loading a cargo of pipelines-said to be for oil exploration. The group that owns the cargo, Techint has said that the pipes were heading towards the Mediterranean ports. To which the Argentine foreign ministry stated: "There is evidence that the ship was being used to supply material linked with the oil industry activities that are being illegally promoted by Britain in the Malvinas (Falkland Islands)".

A bull-blown conflict may not yet be a possibility as Britain's Foreign Secretary, David Miliband expressed confidence in dialogue. "I think the Argentinean government has got many more areas to co-operate with the UK than to disagree about," he said. Not to forget, the UK military has base near Port Stanley so security may not be a problem for the drilling companies.

The co-operation between the countries will help in the smooth execution of the exploration process. The demand for oil is growing; the IEA has predicted oil demand to grow by 120,000 barrels per day in 2010. So, every potential field has to be tapped wherever possible-except, if possible, in environmentally sensitive spots. Renewable energy sources are still not in a position to compete against oil, and so oil exploration ought to be encouraged. Investments have started pouring into oil exploration and it has to keep going, starting with the Falkland Islands.