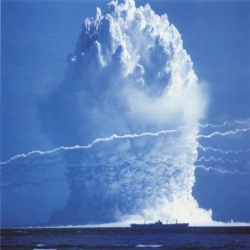 Obama is bringing in nuclear experts to address the spill.

The oil spill in the Gulf of Mexico continues to spill black venom into the sea. The world has got to see stirring images of oil gushing with decipherable great force, enough even to turn a staunch critic towards environmental protection. Initially scoffed and sniffed at, a radical solution in the form of a nuclear explosion is now trotting as a viable option to stop the oil spill. Why? Because no effort should be spared and so far, the stratagems used by BP have been futile. Might as well check out some of the efforts to contain the spill so far:

Chemical dispersants to the tune of 325,000 gallons have been used with planes spilling those 192 or more times in attempts to degrade the oil droplets. Last week, the US coast guard and the Environmental Protection Agency had authorised BP to use subsea dispersants to reduce the damage caused by the spill. These subsea dispersants are expected to break the oil into small droplets preventing them from reaching shore or surface. Billed an 'important step' in reducing the overall impact, according to initial reports these underwater dispersants are said to be 'working'. But concerns have been raised about the possible and 'not- known- yet' damage to the environment as the toxic dispersant are (Corexit 9500 and Corexit EC9527A) untested.

In a desperate move, BP is trying to use a 'Junk shot' method to stop the leak. That's right, junk like golf balls, rubber tyres, plastic tubes, ropes are being used to clog the well. These are to be fed into the Blow Out Preventer. Rewind: it was the failed BOP which started the spill in the first place after the explosion two weeks ago. This 'Junk shot' would be followed by a 'top kill' that is pumping in mud and then cement to overcome the pressure. This method has been used before in the Kuwait oil fields during the Gulf War of the nineties. All these work to be done, as earlier, by robotic submersibles operated by pilots on the surface.

Further, BP tried to insert a funnel directly into the well to pipe the oil to the surface. In the first two attempts a mechanical problem prevented the siphoning of oil using pipes. The tube was then withdrawn to the surface for readjustment after the frame holding the mile-long tube shifted and failed to connect to the leak. But in possibly the first good news the second attempt worked and a tube is expected to siphon oil and gas to the surface. How much and if that works? The answer will reveal itself slowly. BP is also trying to replace the upper portion of the BOP using robotic arms. But that could in fact cause more oil spill, thus a huge risk.

The huge containment dome built after two weeks of work, which was supposed to drain the oil has been abandoned after the build up of hydrates. Five controlled burns have been performed so far, then stopped due to winds and high waves. Skimmers are also being used to collect oil using absorbent conveyor belts which are then treated to extract oil to be used as fuel. Booms, sand bags and sponges are also in the scene deployed to soak up the oil, but the process is slow and dependent on good weather. Make no mistake; a relief well is the best option. Two relief wells are being drilled to ease the pressure off the damaged oil well. Once, the relief well comes in contact with the damaged well, blocking or easing the pressure would be easier. But that will take months to complete and these efforts can go only so far.

Amid these attempts to conjure magic, the blame game continued with the three companies responsible BP, Transocean Ltd. and Halliburton Co. blaming each other for the oil mess. Transocean is the owner and operator of the Deepwater Horizon rig and Halliburton had supplied cement for the well. Lamar McKay, chairman of BP America Inc., says, "Transocean's blowout preventer failed to operate." And, Stephen Newman, Chief Executive of Transocean says, "All offshore oil and gas production projects begin and end with the operator". While Halliburton's line was that it was "contractually bound," to follow the oil company BP's instructions to it. Mr Obama put a stop to the game with stern words, 'I will not tolerate more finger pointing or irresponsibility.'

Still, risky is this blame game and equally risky is the delay, deferment and inaction in the absence of demonstrably proven precedent. The importance of ocean cannot be underestimated. More than sixty six percent of the global population lives within hundred kilometres to the coastline. Ocean is responsible for: feed for livestock, food in the form of fishes and other organisms, source of income for man, supplier of sodium chloride, oil-obviously, and as a source of water in arid regions of the world. And the ocean surface plays a vital role in the water cycle through evaporation and influences climate.

At 5,000 feet below water, battling the low temperature and high pressure is not easy. The pressure of the oil was so high that the BOP couldn't prevent the explosion- and the resultant spill-when eleven people died on 20 April. Also the leak appears to be more than the 5,000 barrels of oil a day estimated earlier, now analysts say the spill was about 13m litres a day with oil plumes more than 10 miles long discovered. As it could only get worse, now is the time to consider the option on a nuclear explosion:

The public opinion, after the initial disbelief which was suspended by images of the spill has rallied in favor of a nuclear explosion. So, finally there's some hope at the end of the tunnel. President Obama has stepped in and has sent a team of nuclear experts to contain the spill. The man in charge to contain the spill is Steven Chu, U.S. Energy Secretary and also the one who helped develop the first hydrogen bomb in the 50s. The five member multidisciplinary team are a creative lot involved in the first hydrogen bomb, finding ways to mine in Mars and ways to position biomedical needles. The team will work along with BP's scientist to find a solution. Meeting at BP's crisis centre in Houston, Chief Executive Officer Tony Hayward said after the meeting, 'lots of nuclear physicists and all sorts of people coming up with some quite good ideas actually.' They are said to have reached 'one good idea' which he declined to reveal. A nuclear option perhaps?

Truth is that Russia has used it at least five times starting with a blast near Bukhara Uzbekistan in 1966. Then a 120 meter tall flame, fuelled by massive natural gas was blazing for three years with deafening sound. When all efforts to contain the flame in the desert failed, a 30 kiloton atom bomb was used. The explosion did seal the well-it worked displacing tonnes of rock over the spill thus cutting it.

Some people fear that a nuclear explosion would set the oil spill on fire. But Soviet Russia has used subterranean nuclear blasts as much as 169 times and the number would add up to more than 1,000 if all the tests by different countries are taken into account. And since the explosion would be underwater and in the absence of oxygen there is no chance of the well burning up. But yes, an explosion close to the surface can contaminate the water due to radioactivity but this spill warrants an explosion underground. The oil is beneath the rock and since there is no air in an underground nuclear explosion, the energy released would overheat and melt the surrounding rock, thus shutting the spill.

So that takes us to the next criticism-possible effects on the flora, particularly the phytoplankton and the marine organisms including fishes. But the spill itself, if unchecked, could cause more damage than the results of the explosion. Further, many tests have been carried underwater and no serious damage has been reported. Another blocker for the nuke option is that it would have to be government operated and a final solution. This goes against capitalism. There is much more money to be made by funding cleaning operations which have no end in sight. As dire times call for drastic steps, the better option is a nuclear explosion or be prepared to see carcass of innocent animals washed ashore.

« Previous
Use nukes to contain the oil spill
Next »
Gulf oil spill: the aftermath