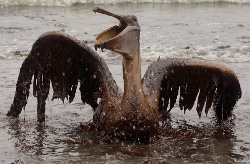 The toxic sludge killing oceanic wildlife by the thousand will soon be hovered inland by hurricanes, threatening animals and humans alike.

Forty long days, and the saga of the Gulf oil spill continues unabated. The efforts to contain the spill seem doltish in multi levels, more confounded as weeks march by, latest in the series 'top kill' too failing to plug the fissured well. Shifting strategies but failed response have mutated to an environmental disaster for the Gulf coast, slowing seeping elsewhere too.

According to government estimate, 12,000 barrels (1.9 million litres) to 19,000 barrels (3.0 million litres) per day of oil is escaping from the well. And the National Oceanic and Atmospheric Administration closed twenty five percent of the federal Gulf waters for fishing from nineteen percent before. The chief executive of BP, Tony Hayward, told a TV channel: "This is clearly an environmental catastrophe. There is no two ways about it," adding, "It's clear that we are dealing with a very significant environmental crisis and catastrophe."

The crude oil, even when in contact with water, stays together as a blob known as 'mousse'. This blob floats on water and sticks to anything it comes in contact with, and unfortunately many marine animals mistake the mousse for floating food, thus poisoning them. Chemical dispersants look like a clever idea to get rid of some of the problems above. Dispersant react with crude oil to extract different chemical components from it, much like a refinery does.

Some of these separated chemicals can mix with water; others are heavier than water and sink to the bottom, to be digested by benthic organisms. In other words, dispersants help the oil droplets disintegrate into smaller droplets for easy decomposition.

Truth be told, dispersants are far from a panacea. They are first and foremost a public relation tool to manipulate public opinion into believing the oil spill is disappearing, digested by microbes. The dispersants keep the oil underwater and together have created a deadlier mix than oil and water. Out of sight, out of mind, and the American public, with an increasingly short attention span buys into it. In reality an oil spill treated with chemical dispersants poses an even greater ecological threat than the oil spill left alone.

Corexit is an extremely toxic chemical dispersant. It was favored by BP over other alternative dispersants more ecologically friendly and with a better track record, mostly for cost reasons. It is estimated that more than 870,000 gallons (3.2 million litres) of Corexit has been used so far, either sprayed on the surface or released underwater-150,000 gallons (570,000 litres).

Dispersants rely on wave movements shearing the oil film mechanically in order to refine crude oil into separate chemicals. This may have worked to some extent on the Exxon Valdez spill of Alaska where waves are big but in the Gulf of Mexico? Ever heard of a surfing competition in the gulf? The waves are just not there for the dispersant to work.

Seven cleanup workers were hospitalized last week after complaints of headache, dizziness, breathing problems and nausea. The workers are said to have told the doctors, according to the medical centre sources, that the chemical dispersant used to break up oil had made them sick. Doctors believe the likely cause to be chemical irritation as well as dehydration from working in the heat. Manufactured by Nalco Energy Services L.P., the Material Safety Data Sheets state that Corexit 9500 cause irritation when in contact with skin, chemical pneumonia if ingested and irritation to the respiratory tract with repeated and prolonged inhalation. MSD of Corexit EC 9527A states:
Symptoms of Exposure
- Acute : Excessive exposure may cause central nervous system effects, nausea, vomiting, aesthetic or narcotic effects.
- Chronic : Repeated or excessive exposure to butoxyethanol may cause injury to red blood cells (hemolysis), kidney or the liver.

No toxicity studies have been conducted for either product, so the extent of damage is still not known. However, according to a study by Exxon, Corexit 9527 and Corexit 9580 have low to "moderate toxicity to most aquatic organisms in laboratory tests." Corexit 9527 is also known to damage the red blood cells, leaving fishes to bleed to death.

In fact, the Environmental Protection Agency has issued a deadline to BP to find an alternative to Corexit, but BP is still using it. EPA told a congressional panel that BP had used less than 12,000 gallons of the chemical dispersant on 26 May, as compared to 70,000 four days ago. On the spraying of the dispersant Erik Fyrwald, CEO of Nalco, said that Corexit 9500 is "safe and effective." And that, "I do believe that dispersants have a positive role to play as a tool. But I think the only people that can determine how to use it and when to use it and which ones to use are the respondents on the ground who are making those calls."

As this is being written, a large cloud of dissolved hydrocarbons has been discovered undersea, by a research team headed by University of South Florida oceanographer, David Hollander. The contaminants are invisible and the reasons Mr. Hollander says, "may be due to the application of the dispersants that a portion of the petroleum has extracted itself away from the crude and is now incorporated into the waters with solvents and detergents."

This is in addition to the two submerged oil plumes, the largest 22 miles long, also said to be the result of dispersants. And, it's less clear the exact damage the oil plumes will cause when they eventually emerge to the surface/reach shore. Further, environmental scientist fear the oil plume entering the loop current-the conveyor belt that carries warm ocean current from Gulf of Mexico through the Straits of Florida. And Florida has extensive coral reefs near its coast. Though oil has already entered the current, scientist say that the oil is caught in a circular eddy that was breaking off the loop current.

Know this: Most of the hydrocarbon chemicals extracted by the dispersants stay at the surface. They are the first ones to evaporate alongside water into clouds overhead that later fly over the continent and provide rain to the southern states. We are talking about chemicals causing cancer or kidney failure such as benzene and pretty much any possible chemical that can be extracted from crude oil. These chemicals would end up in water supplies, rain on crops, and eventually imbibed by humans and animals alike.

During the next few hurricanes, extreme shearing at the surface of the sea will boost the chemical action of dispersants which separate petroleum chemicals and suddenly increase the concentration of noxious chemicals evaporating from the spill. These hurricanes will carry this noxious cocktail across the southern US and north of Mexico, polluting the water supply and all that depend on it.

There's a big similarity between what is bound to happen and the aftermath of Chernobyl. After the Chernobyl catastrophe a radioactive cloud hovered over Western Europe and it has been recorded that many forms of cancer went much higher than usual. This was never formerly acknowledged by local governments.

As for oil affecting the intensity of the hurricane-oil reduces the evaporation of water vapour-scientists say, the oil spill may not impact hurricanes but could, possibly, affect smaller storms. Some environmental scientist say that the hurricane could also clean-up as the combined effect of wind and wave action could hasten the decomposition of the oil. Still, a cause for worry as the hurricane would carry the hydrocarbons-laden water to the coastal wetlands. In particular, winds pull out colder water from beneath the surface, so the oil plume may rear its head faster than expected, not to mention the additional pressure on the sea floor.

Would the current administration want to cause more panic during the next hurricane than there usually is? Read: everything and everybody will have nowhere to hide.

How to recognize the signs that the spill aftermath rained inland:

Effects of the oil spill

For one thing, this oil spill has become the worst environmental disaster in the US. And the oil is expected to gush until at least August, leaving both BP and the government powerless in the face of this tragedy. As huricanes begin to hit the gulf, this southern tragedy may soon take a global turn for the worse. So much for technological advancement.