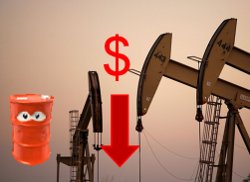 The oil price has ingratiated itself with the lower price band for some time now closing below $73 a barrel in New York on Friday. There seems to be a melange of reasons at play for the price drop. First on the list- oil and gas prices have been rocked by the uncertainty about the extent of economic recovery.

The June job report, not on entirely unexpected lines, was grim with just 83,000 new private sector jobs added. Though lesser than anticipated it was better than the May figures when only 33,000 jobs were added. The unemployment figure did drop from 9.7 to 9.5 per cent-a modest gain, a gain nonetheless. However, analysts believe the drop happened as many people gave up their search for jobs.

On the whole, the job report indicates slow growth. The bearish job report didn't revive fears of recession but didn't offer any hope either. Soon after the jobs report, the price of U.S treasuries fell and the U.S stocks saw their worst week in two months. In Europe the shares closed higher though the German Bund futures fell. On Friday the Dollar fell against the Euro. The president expressed disappointment but said the nation was "headed in the right direction". He said, "We're not headed there fast enough for a lot of Americans," adding, "We're not headed there fast enough for me, either."

After nine consecutive months of northward march, factory orders declined in May-the sharpest since March-the commerce department announced on Friday. The orders for manufactured goods decreased 1.4 percent, the biggest since the March of last year. The departments said that demand for goods fell 2.1 percent. Both, the jobs report and the news from the manufacturing front, point to a slow recovery. The recovery is also an offshoot of the debt crisis in Europe- the governments in the region are moving to curb budget deficits through lower spending. The G-20 leaders have agreed, more or less, to deficit -reduction targets. Remember, a year ago it was times for a flurry of stimulus spending to avoid recession woes. Right now, the consumer confidence is low and so is the spending. Naturally, the demand is low for oil too.

Oil prices fell for the sixth consecutive trading session to jot the weakest price since June 9 with Crude oil dropping below the $73 a barrel in New York. The sweet crude for August delivery closed at $72.44 a barrel, down 4.1% at the New York stock, trading in the range of $75.40 to $72.36, heating oil was at $1.9155 a gallon losing 2.3 cents, and Natural gas settled for $4.687 per 1,000 cubic feet with a loss of 16.7 cents. In the ICE futures exchange, August North Sea Brent crude closed at $71.85 a barrel, 4.2 % lower. The tropical storm Alex, the first named one this hurricane season, didn't deter the oil prices as expected mid-week.

Further, demand for oil is low in China, the second largest consumer of oil. Goldman Sachs has cut its growth forecast for China to 10.1% from 11.4 % on the back of slow real estate growth and the Chinese governments macro regulation policies. The slower growth fear in China prompted fall in Asian stocks too. Earlier BNP Paribas, Macquarie Securities and China International Capital also cut the growth estimate for China.

On the same subject, the Purchasing Managers' Index for China, the world's no.2 economy based on purchasing power, showed slow growth in Chinese manufacturing, falling to 52.1 in June from 53.9 in May. According to National Bureau of Statistics, the drop in the PMI was 'grim' for exports and reflected the impact of policy tightening. Also, The PMI measure for the Eurozone too reported slow growth in the manufacturing sector, the weakest in four months at 55.6.

Why is demand so important?

The demand upturn was important as investors were hoping for a revival as the crude oil stockpiles in the US are above their five-year averages during summer. Last week, according to the Weekly Petroleum Status Report (WPSR), the commercial crude oil inventories decreased 2 million barrels from the previous week. Still, at 363.1 million barrels the inventories are above the upper limit for the average range for June. The gasoline inventories, meanwhile, increased by 0.5 million barrels, distillate inventories increased 2.5 million barrels while the total commercial petroleum inventories increase by 3.6 million barrels. With the advance of summer more people would be on the roads and the low oil prices would be good news for travellers. More Americans will be travelling for the fourth of July holiday weekend (July 1 to July 5) than last year, according to AAA. It has projected an increase of 17.1 percent from 2009, and estimates 34.9 million to take trips at least 5- miles from home. Last year, amid fears of recession, the figures were 29.8 million. The oil spill in the Gulf hasn't cast a spell on tourism, with the AAA predicting increase in travel to Gulf coast region by people visiting family, friends and the parks in the region. The oil extraction, already in process, will continue in Alberta, despite the present prices. But for future exploration prospects-not only for Alberta but across the world- the prices will have to be at the $80 per barrel range. Generally, if the dollar is high it leads to low oil prices. Any fall in the value of dollar, against a basket of currencies, reflects in the commodity prices including oil prices.

The dollar was at ¥87.45 from the 87 yen, the lowest this year for the dollar on Thursday. A weak dollar would reduce exploration activities. Why? Some of the companies pay their expenses-to import goods and services in Euro, and in local currency in different countries but sell oil in dollars. In such cases, the supply will be lower than demand which then increases the oil prices. But supply is high now, so the wait is on for the demand upsurge. On the brighter side, the commerce department has said that consumer spending rose modestly to 0.2 percent in May. This was better than expected hinting at an ongoing economic recovery which is good news for oil.

In a report Barclays Capital said, "We do expect the recovery to support crude oil prices ahead, once much of the doom and gloom mindset fades away, but a pervasive air of somewhat irrational nervousness still persists." Based on the given indicators, oil prices would remain in the $70-80 per barrel band range, in the near future.