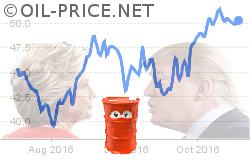 On the campaign trail, Trump promises to increase US oil production which would lower oil prices while Clinton plans the opposite. In reality whoever gets elected will have to tread carefully on oil prices.

The November elections will hoist either Donald Trump or Hillary Clinton into the Presidency. Given that the US is one of the leading producers of oil , what will change with a new President? Well, to answer the question, the shortcut is to look at the 'one' the oil industry favors.

Through it all, Donald Trump has promised the moon to the energy sector in terms of slashing regulations, cutting taxes, encouraging fossil fuels and sleeping on carbon prices. To make matters easy, traditionally, the oil and gas industry sides with the Republican Party. Yet, it's Hillary Clinton who runs away with the cake. After all, donors from the oil and gas industry have contributed twice as much to the Hillary campaign. But, why? Indeed, it could be because, changing tunes like a peppy rap song, Trump says different things on different days. Bit like wrestling with good and bad conscience without knowing which is which.

Yet, is there a clear champion as far as the oil and gas industry is concerned? Let's find out by raking up their stand on some of the major issues affecting the oil industry.

The significance of fracking in the US can never be underestimated. So, what is fracking? Hydraulic fracturing or Fracking is a method of extracting gas by injecting pressurized water, chemicals and sand into the rock. Fracking, according to conservationists, contaminates water, causes earthquake and contributes to Global Warming. Some states like Vermont and New York have banned fracking, while there's a moratorium on fracking in Maryland. However, it's no secret that fracking revolutionized the domestic energy scene in the US. In fact, fracking is responsible for more than half the U.S. oil production. So much so America only trails Saudi Arabia and Russia in oil output. The 4 Million barrels per day oil production is chiefly down to the 300,000 fracking wells in the US.

So, on the issue of fracking, where do they stand, Hillary and Trump? As Secretary of State, Clinton supported fracking, labeling Natural Gas as the 'cleanest fossil fuel available'. In fact, terming it as a bridge between dirty fuels like coal and clean fuels like wind energy, she even promoted the fuel for Europe, China, India and Latin America. As Presidential candidate, she has stopped short of a full ban on fracking seeking safe and responsible gas production, instead. Yes, fracking will stay but with stringent safeguards and standards under a Clinton Presidency.

Trump, on the other end, is also in favor of fracking. Yet, packing a punch, he slides in the rider that the decision to ban fracking should rest with the local communities.

Though production has fallen in recent times, coal is still critical to the economy of many states including the Rust Belt and Appalachian states. However, environmentalists turn over in their graves when it comes to coal and it's not for want of reasons. Coal emits carbon dioxide, sulfur dioxide, nitrogen dioxide, carbon monoxide and small particles making it, possibly, the biggest polluter in the US. Relatively, it's cheaper to produce. Here, it's Trump who champions fossil fuels with a rollback of regulations. He promises to ease environmental restriction on coal. The catch is that he proposes the same for Natural Gas. In which case the support for coal falls flat, as Natural Gas is going to win the race between the two. So, where does he stand? Go figure.

In the tale of the other candidate, Clinton bats for redevelopment and diversification of the coal states. Her campaign announced a $30 billion plan over ten years for coal miners which include long-term health care, pension benefits, tax credits and job training, courtesy of tax payers. Further, Clinton vows that her energy policies will cut more than eighty percent of emissions by 2050. Clearly, that route is not through coal.

On the clean energy front, Trump discounts the Paris climate change deal whereby countries have to reduce carbon emissions. He huffs and puffs on the issue of carbon tax while Clinton is vague on the issue.

Trump supports the Renewable Fuel Standard (RFS), according to which biofuels like ethanol have to be blended with fuels like gasoline. Created during the Presidency of Bush Jr., the RFS was an attempt to reduce oil imports. Touted as environment friendly, it provided an impetus to farmers as well. Many of the oil refiners are against RFS as biofuels are expensive. So are the environmentalists who argue that biofuels may, in fact, be contributing to Global Warming.

Meanwhile, it's bit more complex on the Clinton side. Initially, Clinton was pro-ethanol. However, then came reports that the camp was looking at alternatives to RFS. Later, a spokesperson clarified that Clinton was 'committed to getting RFS back on track.'

Stacking up points on the clean energy front, Clinton wants to put in half a million solar panels. Apart from clean energy, the move is expected to create more jobs. Trump doesn't really believe in solar power. In true Trump fashion, he believes Government investment in solar companies was a disaster. Without naming, he was, of course, referring to Solyndra, a solar panel company that took loans from federal government before filing for bankruptcy.

Keystone XL by Trans Canada is a proposed oil pipeline that would carry crude oil from Alberta, Canada to refineries on the Gulf coast of Texas. Oil in Alberta is extracted from tar sands, a process blamed for more pollution than the traditional drilling. Asides, the pipeline met with opposition from environmental groups because of the fragile ecosystem through which it would have passed. Though most of oil produced from the Alberta oil sands is bought by the US, President Obama rejected the pipeline last year.

As for the candidates, Clinton camp is against the construction of Keystone XL pipeline. Like President Obama, her administration may just sit on the issue for the longest time. On expected lines, Trump has vowed to support the pipeline. He has said that he'd ask the company, TransCanada to reapply for permit. In which case, the pipeline would be built within 100 days of a Trump presidency. The businessman that he is, Trump wants a share of the profit from the pipeline, almost twenty-five percent at that, for the exchequer. However, that could run into trouble as it would mean a direct violation of WTO trade agreements about private property. According to WTO agreements, there must be a level playing field with similar tax for foreign and domestic products. Should Trump levy extra tax on TransCanada, while other companies using the pipeline go scot-free, there would be major repercussions concerning all global agreements.

Staying with oil pipelines, the Obama Administration temporarily stopped the construction of a part of the Dakota Access Pipeline , a $3.7 billion project transporting oil across four states, starting from North Dakota. Since it comes closer to Native American reservation, there have been huge protests against the pipeline.

Curiously, both candidates are silent on the Dakota Access Pipeline, key in improving the US energy infrastructure. Do they support or oppose the pipeline? None is wiser. On the energy front, DAP could be the first test a President will face.

Drilling is one of the methods to bring oil to the surface from an oil well. It is also one of the most invasive processes that affect the ecosystem. Rolling along, the Obama administration announced earlier this year that it would not sanction drilling near the South Eastern Atlantic coast.

Notwithstanding, the administration gave approval for drilling in the ecologically fragile Alaska few months ago. Clinton has been vociferous in supporting a ban on offshore drilling outside Gulf of Mexico.

Trump, meanwhile, has said that he would revoke all policies that restrict drilling in the Arctic and the Atlantic coast. He wonders why America is 'slow' on drilling. He supports opening of federal land and other continental shelf to 'exploration and responsible production.' What if there's an oil spill? Of course, 'clean' and 'fix it', he says. What about people dependent on land, the farmers for one? Well, arguably, he has assured that federal lands where people hunt and fish would be protected. And, how he proposes to do both is a part of the million dollar question.

Now that we know the energy policies of the candidates, how will the oil prices fare under them? Obviously, predicting future oil price is next to preposterous but let's take a cultivated guess from what we know.

From the pointers given, Trump advocates more drilling to revive the US energy boom which rose and fell during Obama's presidency. He is all for lifting moratoriums and easing regulations so that oil companies could, presumably, squeeze out more oil from the ground. Except that, oil companies will lose money if they start new drilling projects because of the oil supply glut in the market. If continued in the route shown by Trump, the oil companies are bound to lose money as oil prices will plunge further because of a saturated market.

On the other hand, Trump has stated that he would stop buying oil from Saudi Arabia if the Government doesn't furnish troops to fight ISIS. That would increase the oil prices, yes. Considering how Trump was bailed out of bankruptcy by a Saudi prince and how his company continues to do business with Saudi Arabia, Trump's threat is a distinct impossibility.

Hillary as President is bit more hawkish for oil stocks. Her allergy for coal may, in reality, counter benefit the oil industry. However, as far as the oil price goes, it depends on how she acts on fracking. There's no way she is going to ban fracking. A tight regulation will be of some concern, though. Still, oil prices will not vary much from the present. She'll have more friendly relations with Saudi Arabia, as the country is one of the major funders of her campaign. So, suffice to say, oil prices are headed higher under her Presidency.

With the war cry of 'energy independence', it appears as if Trump would grant a free rein to the oil companies. However, nothing is predictable with the vacillating man. He may just as well change his mind and tax the oil companies with all his might.

So what about the energy policies under Hillary Clinton? With Clinton, the specter of more regulations looms overhead. Her administration will give more impetus to the renewable energy sector. However, the truth remains that it's better said than done. The vision to run America entirely on clean energy by 2050 is, to put it bluntly, a utopian ideology. In reality, like the Obama administration, she may just opt to sit on many issues.