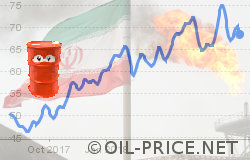 President Trump's stance on Iran will send oil past $150 a barrel.

After scaling a three-year high of $79 a barrel, oil prices fell taking a nine percent drop on the back of better supplies, resumption of Libyan oil production and increased Saudi oil output. But the reversal began soon enough with the prices climbing back. Plenty of reasons? Let's say a single one - sanctions on Iran.

Since (even before) his election, Trump has been at odds with Iran the way Bush riled on Iraq. With gusto he has quickly undone Obama's vision towards a non-nuclear Iran. In the deal of 2015, earlier restrictions were removed on the promise that Iran would stop pursuing nuclear capabilities. Under this new administration, the US withdrew from the 2015 Iran nuclear deal unilaterally and reimposed sanctions on the Middle-Eastern nation. Further, hammering away more woes, the US has asked all countries across the board to end Iranian oil imports by this November.

With the US withdrawal and an embargo back in full force on Iran's oil, we are again in a similar situation to 2008. That year, Iran threatened to close the straight of Hormuz, sending oil spiraling to $160 a barrel in a matter of months. Sounds familiar?

Like his Republican White House predecessors President George Bush and VP Dick Cheney, Trump is close to the Saudi Kingdom, Iran's arch enemy. Saudi Arabia and Iran are at odds on religious grounds. To explain: Saudi Arabia heads the Sunny branch of Islam and Iran is the de-facto leader of the Shia branch. As things stand, though of a single religion, both hate each other. This is the reason Saudi Arabia (Sunni) invaded Yemen (Shia) in a proxy war where the US backed Saudi Arabia with material and personnel, while Iran backed Yemen in the same way. Given that Saudi Arabia recently purchased $100 billion of US weaponry, the Trump administration was quick to accuse Iran of sponsoring terrorism (never mind that fifteen of the 19 hijackers of 9/11 terror attack were Saudis). To be fair Iran does sponsor terrorist organizations, but nowhere near as prominently as the other Gulf state. Is it then unfair to single-out Iran under the guise of poorly concealed financial motives? I don't judge.

Rather, let's take a look at what Iran can't or can do, before history repeats itself. As it will.

Iran and its Strait of Hormuz

Iran has a crucial trump card, the Strait of Hormuz.

A narrow waterway lying between Iran and Oman, the Strait of Hormuz is a major shipping route and only passage from the Persian Gulf to the wider ocean. In other words, 90 percent of oil from the Persian Gulf, which boasts of major oil producers like Iran, Kuwait, Qatar, Saudi Arabia and the United Arab Emirates, passes through this route to reach the rest of the world. The heavily guarded route is also the only route for LNG shipments from the world's largest natural gas exporter, Qatar.

If this strait is (threatened to be) blocked by Iran for a month or so, there'd be panic buying among investors leading to escalation in oil prices. We are confident that oil price will soar past $150 in no time.

Why is Iran using the Strait of Hormuz as a bargaining chip? Because Iran is well aware of the Strait's role in global oil trade, and it worked last time. The nominal capacity of the strait is fourteen oil tankers, which is about seventeen million barrels of oil per day. In 2016, exceeding the nominal capacity, 18.5 million barrels of oil per day were transported, or about half of world's daily crude oil exports. Taking into account transport of seaborne crude and other liquids, about 30 percent of the world's tankers are centered here, making it the busiest oil transit point.

What we are seeing now is a repeat of the familiar picture of 2008. Back then, the economy was doing great. We had a Republican President enjoying a chummy relationship with Saudi Arabia. Still, OPEC did cut production as it did recently. On the sidelines, tensions with Iran rose. Naturally, oil prices surged and strained past $100/barrel for months. Gas was close to $5/gal in the US. The 2008 global financial collapse, in reality, blamed almost exclusively on lack of oversight on the banking system was in reality triggered by cascading bankruptcies caused by increasing cost of operations due to record oil prices.

Now, more than the nuclear power, President Trump is keen on a regime change in Iran and as a result, is pushing for another revolution in Iran. Is that prudent? For, forty years ago, the revolution in Iran doubled global oil prices.
In fact, oil prices fell only after production was restored in Iran after two years. If a revolution does take place, oil prices driven by speculation will only go higher. An ill-timed move, thus. 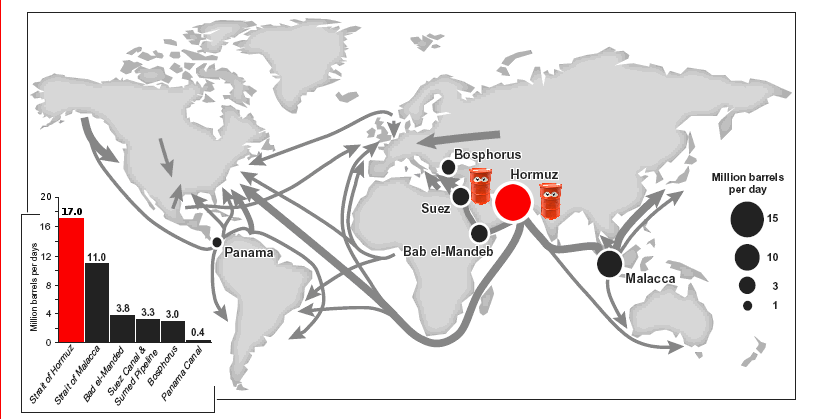 Hormuz is the world's largest crude oil transit point by volume. A full 1/5 of the world's oil supply transits through Hormuz.

Some analysts argue that Iran will never shut down the Strait of Hormuz. Indeed, starting from 2008 Iran has, on many occasions, threatened to choke the Strait following US and European sanctions. That's why many are unconcerned about the developments in Iran. With this apparent lack of interest and opposition, the Trump administration has switched from a lenient to hardcore stance on sanctions. The US wants to cut off all Iranian supplies, come what may. 'Zero oil exports' from Iran is the new-found goal.

For its part, Iran has reminded that if the oil exports are stopped, it will not allow any oil shipment to pass through the Strait of Hormuz. It's an 'all for Iran' or 'none for all', approach. As things stand, there's lot to be gained if Iran is able to export oil freely. For starters, more oil in the market and thus low prices. The Strait of Hormuz will also heave a sigh letting pass a fifth of global oil consumed every day. Who else will gain? China is the largest importer of Iranian oil, while Iran is the third largest oil supplier to India. Both the Asian countries are in dire need of Iranian oil. Turkey who shares a border with Iran also signaled its intentions to keep importing Iranian oil no matter what. Hence a zero export goal of President Trump will likely never materialize.

By this November, the comprehensive sanction against Iran including Iranian oil exports would be locked in place. Theoretically as soon as Iran blocks the Strait of Hormuz, the US Navy, along with Saudi Arabia and UAE's, will jump in to resume navigation. A conflict will breakout, and we'll have a major war in our hands. In another potential scenario, any military intervention near the Strait of Hormuz, accidental or intentional, can have massive repercussions leading to higher oil prices.

Who will benefit from oil above $150 a barrel?

Ultimately, Russia and Saudi Arabia, two of the largest exporters of petroleum, key influencers of the Trump administration will benefit immensely from a surge in oil prices. So will Iran, to a lower extent because of the embargo. Already, Saudi Arabia and Russia have hinted that OPEC could scale up production to exceed 1 million barrels a day if the oil market needs it. Saudi Arabia has reassured the US that if necessary, it'll add 2 million barrels a day from the spare capacity. What about the shale oil, you ask? Oil production in the US has increased however, infrastructure issues pipeline trouble persists. Of course, Libyan oil production has increased too. However, just imagine the situation if they pull out all this oil on a single day? Wow, what a price rise it'd be.

Renewables too are likely to benefit. Although it is unlikely this administration will promote solar through tax incentives, renewables have become cost effective on their own merit and have are now mature contenders in energy markets, with public opinion on their side. Tesla model 3s, which have outsold BMW 3 series since their introduction will be flying off the lots.

All US oil producers, especially frackers and shale producers with break even costs around $60/barrel will benefit immensely. The North Fakota Shale boom will resume in full force. Got property in North Dakota? Time to hold on to it! Had roughneck experience circa 2008? Brush up your resume', the oil boom is returning to North Dakota and Texas!