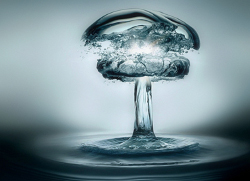 The nuclear option is, possibly, an expedient road to stop the spill.

The odds are stacked against: potential radioactivity, more pores, more spills and a whole array of add-ons. Put that way, it sure doesn't seem to come from a sapient mind, the provocative option of a nuclear explosion to contain the oil spill. But then, what has been wise about the whole action on the Gulf of Mexico?

Some efforts seen so far to plug the spill from Deepwater Horizon: Oil booms, controlled burning, use of chemical dispersants-more harm than good, giant cofferdams, 'top-kill', and a failed attempt to install a second blow-put preventer. According to Government estimate, a staggering 83.3 million to 181.7 million litres of oil have leaked out of the well so far. The scale prompting calls for drastic action.

Indeed, when President Obama appointed a five member team headed by US Energy Secretary Steven Chu, there emerged a possibility of a nuclear option. However, the speculations were quashed with a spokesperson for the Energy Department ruling out the option of a nuclear blast to seal the spill.

At the heart of the discussion is the experience of Soviet Russia. The former Soviet Union had used controlled nuclear blasts to seal burning gas wells at least five times from 1966 to 1981, as reported by the Russian newspaper Komsomolskaya Pravda. The first one used in 1966 was in Uzbekistan on September 30, 1966 when a subterranean nuclear blast, 1.5 times the strength of the bomb used in Hiroshima, was used to seal a well that had been blazing for three years. Then, conventional means had failed to stymie the fire from the gas well. The nuclear blast deep underground melted the rock and the well was plugged in twenty three seconds. However, the Soviet blasts were on land and not on oil wells.

Still, a nuclear blast on the Gulf of Mexico is not some hastily packed mumbo- jumbo. In case of a controlled nuclear blast, the intense heat generated from the explosion will melt the rock surrounding the well to form a glass plug. This plug will seal the oil spill completely, and the sea floor detonation would be the first of its kind. Matt Simmons, a Houston energy expert said, "Probably the only thing we can do is create a weapon system and send it down 18,000 feet and detonate it, hopefully encasing the oil."

Admittedly, the question which begs for answer- what about the radiation hazards for the marine ecosystem? Contrary to popular belief the surest way to plug the well is not to detonate the bomb underwater above the wellhead but in an underground gallery nearly parallel to the well. All radioactivities then remain contained underground under water with zero chance to contaminate underwater wildlife. The costs and impact are minimal to the ecology. In fact, the environmental effects are to be juxtaposed to the million gallons of oil leaking every day. 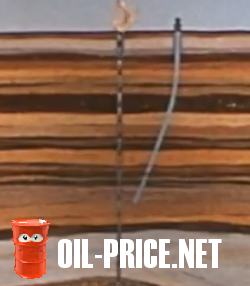 A nuclear charge is placed in a gallery parallel to the well then detonated, sealing the oil leak shut.

Asked about the nuclear option, the Coast Guard commander co-ordinating the Federal response to the spill, Admiral Thad Allen, said, "I think that's really on the peripheral of things we ought to be talking about right now." On other explosive devices being used, he said that a blast could worsen the situation by exposing oil-bearing rock formations directly to the sea bed. Indeed, conventional explosion may not work as they do not produce enough heat to fuse rock and they may even end up destroying the wellhead, and thus the efforts to work from the top.

On the petulant question of paranoia associated with the nuclear blast, consider this: According to IAEA's Power Reactor Information System (PRIS) there are 438 nuclear power reactors in operation. And with Project 885 and 935, it's the fourth generation of nuclear submarines in the US.

The nuclear option is, possibly, an expedient road to stop the spill. The weight of the water exerts a massive pressure which will enable to lessen the range of the aftermath. At the same time, a word of caution, its better if the scientists test for the presence of underground pockets of methane hydrate or fire ice, which might intensify the blaze after an explosion.

But more to the point, would the option be used? Not very likely. The US has been campaigning for the Comprehensive Test Ban Treaty since 1996, when it was adopted by the UN General Assembly. The treaty bans the use of nuclear arms for civilian or military purpose. A nuclear explosion would also violate the arms treaties signed by the US, and President Obama has been vociferous for global nuclear disarmament and a nuclear-free world. So, it would be nothing short of a miracle for the present administration to use a nuclear device.

Meanwhile, some flavour of success on the 48th day with the breakthrough in the form of a 'containment cap'. The capping device was placed over one of the vents using remotely operated robots, and the cap has been instrumental in capturing about 10,000 barrels a day. Though there are three more vents releasing oil into the sea, this is still a success.

The initial plan was to cap all the four vents but engineers decided to keep some vents open, as the oil captured from one of the vents was more than the estimated level for the drill ship to process, and also for the stability of the system. The drill ship Discoverer Enterprise is able to process only 15,000 barrels a day which is close to the 10,000 a day collected from one vent itself. Since hydrates-formed when water mixed with oil- prevented the deployment of cofferdams, methanol was pumped into the containment cap.

Real difference would arrive only when the two relief wells become operational by August. Adm. Thad W. Allen, appearing on CBS said, "The spill will not be contained until that (relief well) happens," adding, "But even after that, there will be oil out there for months to come. This will be well into the fall."

Additionally, BP has plans to use a new device in the form of a free standing riser pipe to funnel the oil through a manifold built during the 'top-kill' procedure. Also on the anvil is the plan to use an 'overshot tool' over the containment cap to for tighter seal, and to capture more oil.

For now, though, the effects of the oil spill have reached the predators of the food chain, and the number of birds emerging doused in oil has been increasing. The cap will be able to stem only some of the oil-10,500 barrels of oil diverted as on June 6-while the remaining is still getting added to the ocean water.

Significantly, June 1 was the start of the hurricane season with the National Oceanic and Atmospheric Administration (NOAA) estimating up to 14 hurricanes this season. The weather can force the ships on the surface to desert the efforts to stem the flow, even the latest containment cap. If the nuclear option is debated seriously, now is the time to consider.