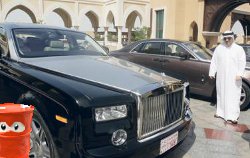 Ghadaffi's tragic ending prompted Oil Sheikhs to face a tough choice : either trickle down petrodollars to their subjects and avert unrest or keep buying more Rolls Royces instead.

What is the lower bound of oil prices?

We have written extensively about the drivers of oil prices to the upside: higher production costs, the lack of transcontinental pipeline in North America, skyrocketing oil demand in China, and going by recent findings, price-fixing by oil majors, traders, speculators and market manipulation. But what about the downside? It seems oil prices never go down past a certain level. What's the minimum price of oil and what really guarantees it?

Therein, here's a starter to bust one of the above. Supply? So, more the oil, lower the prices, right? Wrong.

In addition, if more of federal land, both on and offshore, is thrown open for exploration, the production will increase even further. On the other hand, the demand for oil has seen a decline in the U.S. and in Europe- the gasoline demand in the United States, at 8.7 million barrels a day, is the lowest in over a decade. Yet, check the oil prices. Well, as we have pointed to before, the lack of demand here has been offset by demand for oil and gas in the developing Asian markets. According to IEA, the global demand is poised to rise eight percent between 2012 and 2018 to reach 96. 7 million barrels per day. But these figures are based on the projection of the Internal Monetary Fund of 3 to 4.5 percent global economic growth during the corresponding period.

And, weaker oil prices are also due to, among other things, weak economic growth, poor production and supply disruptions. But there is also a limit to the downside and this, a price below which influential actors will not, cannot let the price of oil slip.

What guarantees the minimum price of oil (and gas)? Surprisingly it's not production costs. Indeed.

Obviously, drilling for oil is pricey. Expensive labor, swelling cost of inputs like diesel fuel, chemicals and steel have all, in various degrees, increased the cost of exploration and production. The supplies from unconventional sources are also expensive. Furthermore, with stringent environmental norms in place, oil companies are forced to shell out more to keep their licenses. According to a research report published last year by Bernstein Research the cost of production in the most expensive (marginal cost of supply) new field has shot up to $92 per barrel, quickly nearing $ 100 per barrel-excusing OPEC and former Soviet Union. In simple economic terms, higher oil prices lure the companies to spend humongous resources on exploration and drilling. If the prices fall below a certain range, it becomes unviable for oil companies to spend energy on future explorations.

Indeed, like bees complaining of honey, oil and gas companies shout of the need to have oil prices between $80 - $85 a barrel for sustained exploration and development. Of course, it's the higher oil prices, as the popular justification goes, that permit oil companies to explore oil sands and shale and recover the higher production cost. And, we are talking about billions of dollars as investment, as profit. Counter intuitive? Well, what about the existing wells? Got you! Don't existing wells produce oil too? In other words, we aren't talking about wells that don't exist, are we? Reel or real? Ans: Real. Productive wells on large reserves continue to process oil and gas. What about them?

Except, we are back to the question: why not lower oil prices? The answer lies in a bunch of reasons, the biggest being the price of political stability. Let me explain:

The Wave of unrest in the Arab world two years ago changed the history of Egypt, Libya, Syria and Tunisia forever. As you may have heard, the initial catalyst for the protest in Tunisia was unemployment. Soon, inflation, corruption, joblessness, unfair distribution of wealth, misgovernance and lack of freedom fuelled upheavals across the region. Naturally, this Arab Spring evoked real fear among the rulers. Gaddafi's tragic ending to the hands of his constituents provided a real lesson and many rulers have taken a second look at their notion of 'trickle down economy'. In the aftermath of Gaddafi's slaying, Saudi Arabia and the UAE increased government spending significantly through popular programs and subsidies to sidestep mass protests in their countries. Happily, these wide-spread attempts to distribute wealth succeeded with consummate ease- thanks, oil money.

Of course, these countries will be in dire straits should the oil prices deflate in the near future. And as the income is tied to oil sales, the minimum price Saudi Arabia wants for its oil has gotten, as expected, higher. In fact, most oil-producing economies (Saudi Arabia, Qatar, UAE) depend heavily and exclusively on domestic oil production for income as opposed to productive income-earning tax payers.

Evidently, Saudi Arabia can expand production as and when it wants-in light of the latest discoveries/technologies in oil exploration. But since more oil will lead to lower oil prices, the kingdom is happy to sit on its oil reserves. That also explains why the Saudi oil Minister, while 'politely' welcoming the increased oil production in the United States, saw 'no need to go beyond our 12.5 million b/d capacity.' Why would they when they need oil prices above $80 to maintain stability? So, according to latest reports, crude oil output in Saudi Arabia May average 40,000 barrels a day less than in 2012.

Supposedly, what happens with $50 a barrel energy prices? (Consumer is happy!) Along with Bahrain, Saudi Arabia, Russia will probably suffer political collapse.

As you may know, OPEC is an oil cartel that exists to protect the interest of its member countries. As a result, when more oil arrives in the market, more is the spare capacity of the mother of 12, OPEC. Check the facts: OPEC lowered its production by 21,000 barrels a day in February compared to 30.32 million in January. OPEC is responsible for about 40 percent of world's oil even with a production cap of 30 million barrels per day. Analyst believe that OPEC countries need the oil prices to stick around $90- $100 to maintain their popular doles as well as budget. According to NCB estimates, Saudi Arabia will need to sell its crude at an average minimum price of $72.80 this year to balance its annual budget compared to $67 in 2012. Indeed, at a time when Europe and the US are tightening their belt and cutting programs, the Saudis increased welfare spending by over 8% so far this year.

In the case of Iraq, the production capacity is expected to grow by 1.6 million barrels per day to 4.8 million barrels per day by 2018. With sanctions in place, the production increase/decrease of oil in the case if Iran is unclear. Also, if estimates are to be believed, the crude production capacity could fall by 1 million bpd- 2.38 million bpd by 2018. Recently, it was reported by the International Energy Agency (IEA) that rising shale oil production in the U.S. will be able to meet the world's oil demand in the next five years, even with faster economic growth. If this prediction comes true, the days of OPEC manipulating the oil prices are drawing to a welcome end. The IEA has also lowered its estimate for OPEC crude demand in 2017 to 29.99 million bpd, which is down by 1.22 million bpd from previous estimates.

There are other factors at play too:

Tellingly, when governments around the globe are tightening their budgets with massive welfare cuts, many of the OPEC countries are busy distributing money to their people. It seems Gaddafi's absence at OPEC's table has been noticed by his counterparts. We weren't at that meeting, but can speculate that, while staring at Gaddafi's empty seat the Saudis had an epiphany that feeding their own people had recently become more urgent than collecting Rolls Royces. This brings to mind an age old adage- Julius Caesar knew a well-fed and entertained populace is less likely to revolt. Amidst all this though, the oil prices will, goodness gracious, remain high.

« Previous
North Korea and its effect on oil price
Next »
OPEC and oil prices - is the story over?