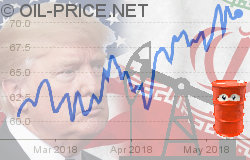 The oil market is bullish. Oil prices continue to scale new height. We take a detailed look at the reasons behind the rise in oil price.

Ever heard of harmony in oil prices? Recently, Brent crude oil hovered near the $80 mark, the maximum since November 2014. So it goes. Oil prices are on a rage, riding on a more than three-year high. The increase in prices comes on the backdrop of geopolitical tensions and sanctions tightening the supple oil market. Well, the recent escalation in prices is, to a greater degree, down to the fear of sanctions against Iran. Let's look at the swirling sanctions and mixture of other factors that drove oil prices to where they are now - North!

In a mighty flourish, the oil prices have been rallying for much of April. At the crux is an integral fear of sanctions. The US president is on the threshold of a crucial decision on whether to withdraw from the Iran nuclear deal of 2015. The Trump administration has made it clear that any move by Iran to restart the nuclear program would lead to 'bigger problems'. The threat is real. A flick of the President's hand is all that's needed now. Fact is oil prices soared immediately after President Trump called the Iran nuclear deal 'insane'. The posturing is seen as an important step in re-imposing sanctions on Iran. As it is, Saudi Arabia has been fiercely lobbying for the sanctions. The Kingdom is desperate for high oil prices as it plans to list the state controlled company, Saudi Aramco later this year. Naturally, sanction on Iran is the easiest way to go.

Why are investors allergic to sanctions? Well, the essence is, investors are wary of uncertainty in the market. A sniff is enough to scuttle them for cover. This time, though, there's more than enough reason for the panic. Re-introducing sanctions on Iran will squarely squeeze the supply of world's oil. Iran is the third biggest oil producer in the OPEC. Further, it was responsible for 4% of the world's oil this March. Any sanction on Iran can tighten oil supplies, leading to the disappearance of 500,000 barrels a day just like that. As you know, Russia and OPEC have reduced output since early 2017 in a bid to reduce the global supply of oil. This restriction in output is expected to last till the end of 2018. Although the cuts have reduced supply, the surge in oil production in the US has managed to offset the impact, somewhat.

The objective of OPEC to reduce crude inventory in the US has shown mixed results. Belying expectation, crude inventories showed a healthy color this month. According to the American Petroleum institute, crude oil inventories rose to 1.1 million barrels, while EIA puts the figure a lot higher at 2.2 million barrels in the week to April 20. This is a bit of a shock as many analysts expected a decrease of two million barrels. Now you know why oil hasn't shocked us at $90. Yes, a delicate balance still plays because of shale oil in the US. However, reinstating the economic sanction on Iran will tilt this balance.

Basically, of all the recent factors, the prospect of sanctions on Iran is the most significant reason for the rally in oil prices. The UK, France, Germany, Russia and China, the other nations in the nuclear deal, want the agreement to remain in place. However, the Trump administration wants to fix what it calls, 'terrible flaws' in the accord by mid-month.

If the sanctions are, in fact, imposed, crude will move further North in no time. You ask why? Again? See, Iran will not be able to export its crude oil as easily. It would be rather hard for Europe and India to bypass the US and buy oil from Iran. In which case, expect an increase of $5 a barrel. Now, will it happen? If you think sanctions are too spooky and that the threat is rather high on something called, 'emptiness,' realize that we are talking about the Trump administration. This administration's decision can over-run logic, as we've seen in plenty of cases. Whatever be the President's ruling on May 12, if you are an oil investor, relax and let the oil prices go lower as they should. In which case, oil would be where it ought to be -below $50.

Russia in the bargain

The US has placed financial sanctions on Russia for its role in the US elections as well as for meddling in Syria and Ukraine. As a result, the Russian rouble took an immediate hit and slumped down. For now, the investment flows are back to normal but sanctions in place are never good news. Remarkably, unlike Iran where the sanctions are yet to be imposed, Russia is already under the weight of them. The barely contained crackdown affects the oil sector too. Rarely relenting, the price of oil has increased. And, paradoxically, it hurts Russia less, while consumers in the rest of the world suffer.

Taking to Twitter, President Trump has blamed the OPEC cartel for keeping the prices artificially 'very high'. As we saw earlier, the cut in production by Russia and OPEC has, indeed, reduced the flow of oil in the global market. At the same time, how can sanctions rectify this scenario? In reality, sanctions (against Iran or Russia) will only worsen the situation.

It is no coincidence that the demand for oil continues to rise. The IEA puts the demand growth at 1.5 million bpd in 2018, while we at oil-price.net forecast the growth at more than 2.5 million barrels a day. On top of that, demand in Asia is expected to hit a record high this April. US production last week stood at 10.54 million barrels per day, a jump by more than a million barrels a day since January. This positive news ought to have dampened the oil prices. That hasn't happened. In fact, the sanction will only deepen ties between Russia and Saudi Arabia. Elsewhere, President Trump is also considering additional blocks on Venezuela for the internal crisis. In this case, sanctions are as a response to President Nicolas Maduro's hasty decisions affecting his country. Evidently, this will only increase the oil prices. Even with declining production, Venezuela produces an incredible 1.488 million barrels as day as of March.

Well, being unhappy about high oil prices is natural but aiding the oil prices to soar higher with sanctions is adding fuel to the fire. Can someone explain the psychology behind this high risk and acute irony?

The profound Saudi Factor on the oil scene

The influence of Saudi Arabia is never subtle on the oil market. Any change in oil price, high or low, you can bet Saudi's hand in splitting the edifice. It's no different this time too. For sure, there is geopolitical tension in the Middle-East with the launch of unsuccessful missiles by Yemen against Saudi Arabia. Yet, it's nothing unusual to warrant changes in oil price.

It's no secret that Saudi Arabia wants oil at $100 a barrel. Certainly, apart from the revenue, higher oil price will reap higher valuation for Saudi Aramco's $2 trillion IPO. Selling five percent of Aramco will fetch more than $100bn with the rallying oil prices. With a budget deficit of more than $50 billion, lofty oil prices will also help bridge the huge fiscal deficit. More specifically, it will also help the Kingdom get back its dominance in the oil market.

Lest we forget, Saudi Arabia, with twenty two percent of the world's reserves, is the world's top oil exporter. The supply cuts that are in place have reduced Saudi oil output by 1.8 million barrels a day. Nevertheless, Saudi Arabia still retains a formidable presence in the oil market. In the meantime, Libya and Nigeria have limited production to a combined 2.8 million barrels a day since this January. Thus, conformity level of OPEC and other oil producing countries has touched 149% with 300 million barrel decline since implementation.

Higher oil prices mean higher inflation affecting all of us. With the exception of Japan, inflation isn't good news for the rest of the world. That said, Saudi Arabia, should it choose, will opt for higher oil price every single time. US shale oil production is definitely on the rise. That's definitely positive news. On the other side, we have a combination of potentially deadly factors at play: OPEC's production cut continues; demand for oil is ever on the increase and surplus oil is disappearing fast.

The US is the primary supplier of weapons to Saudi Arabia along with Europe. If there's someone who can help Saudi Arabia achieve its goal of $100 oil, it's none other than President Trump. He only has to impose few more sanctions, and see how the oil rockets to $100 a barrel.

Oil price expected to rally in 2018

There's a plethora of factors at play, all of which deserve due consideration, while predicting oil prices. From forecast of $50-60 a barrel for the latter half of this year, on the back of some severe bullish sentiments, many analysts have raised the range to $80-$90. By all means, the thorny productions cuts by OPEC and allies will extends well into 2019. Oil demand continues to rise and a supply deficit may well happen by the end of this year.

Standard Chartered Bank raised its forecast by $10 with Brent and WTI benchmarks averaging $71 and $68 a barrel respectively this year. The 2019 price forecast was also revised by $13 a barrel with Brent at $75 and WTI at$71. Saga Nagoya Securities also predict a rally in oil prices this year. Want more? Here we go. The World Bank says the oil prices will average $65 a barrel this year, which is lower than the forecast of others.

Meanwhile, the rig count in the US rose to 820, the highest in more than a year. The US crude oil output has already surpassed Saudi Arabia's. The US produces 10.4 million barrels to Russia's 11 million, a country it can beat very soon. The combined exports of crude and petroleum products in the US also scaled a weekly record of 8.3 million barrels a day. See, good news.

Global economic growth is rising at a healthy pace, while demand is accelerating, so don't be surprised to see consistently high oil prices. Apart from geopolitical tensions, sanctions can spearhead a rise in oil prices. Left to Shale, we may see healthy oil prices. Leave it to President Trump with his sanctions and face the shock of higher oil prices.

« Previous
Is Volatility in Oil Price on the Way, Again ?
Next »
Iran tensions to send oil price past $150 - again