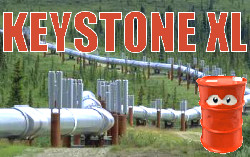 A landowner dispute is the latest in a series of hurdles slowing the pipeline' approval.

A review of news headlines in early 2014 will alert those interested in the US oil industry to a raging controversy and planning row over the construction of the Keystone oil pipeline. This infrastructure project is intended to transport tar sands oil from Canada to US refineries. Environmentalists and their allies in the Democratic Party are fighting the oil industry and their Republican Party defenders. Those opposing the pipeline want to prevent its operation and paint this as a battle of US farmers against foreign corporations, the little guy against big business and the environment against business interests. You may have read that President Obama has announced he will make a decision for or against the development of the pipeline in May 2014. However, given all the publicity and effort that politicians and pressure groups have put into this debate, you would probably be surprised to learn that the Keystone pipeline is already operational.

America needs oil to drive its economy. The fact that the USA consumes more oil than it produces has driven US foreign policy to seek and control oil in other countries. The geo-political consequences of this shortfall has pitched the USA against Venezuela, Iran, Iraq and Libya and made it allies with repressive regimes in countries such as Saudi Arabia and Egypt. The vulnerability of the US to the intentional actions of foreign governments, or the chaos created by their overthrow caused Congress to focus on a national energy policy that encouraged the development of domestic resources and those of reliable neighbors. This lead to the discovery and exploitation of oil in the Canadian province of Alberta and in the North-West of the United States.

Oil production ran ahead of infrastructure and so new volumes had to be transported to the refineries in the USA over the road and rail network. US refineries still source supplies from long distances overseas. Oil tankers burning bunker fuel and trucks and train engines driven on diesel belch fumes and pollution. The transport of oil to refineries by rail is costly, inefficient and contributes to high oil prices. Furthermore it is damaging to the environment. The Canadian pipeline operator, TransCanada saw an opportunity to provide the necessary infrastructure.

The Keystone project began in February 2005. The first stretch of the conduit from Hardisty in Alberta to the US border gained approval in September 2007 and the US government granted a permit for the pipeline to cross the border in March 2008. Phase 1 of the pipeline runs 2,147 miles from Hardisty in Canada to Patoka Illinois. Along the route, the pipeline delivers synthetic crude oil and diluted bitumen to refineries and storage facilities in Steele City, Nebraska and Wood River, Illinois. This pipeline has been in operation since June 2010.

Phase 2 of the pipeline followed on immediately after the completion of Phase 1. This branch carries the "syncrude" and "dilbit" pumped down from Alberta on to the oil hub in Cushing, Oklahoma. This extension became operational in February 2011. Phase 3 carries the Canadian oil on to the Port Arthur market in Texas. This segment of the Keystone pipeline also transports US-produced crude from the Cushing holding tanks. Oil flow began on this pipeline in January 2014. US oil producers have requested a branch of Phase 3 to holding stations near Houston, Texas to increase the storage capacity available to produces in the mid-West.

If TransCanada has been operating the Keystone pipeline across American territory since 2010, why has it become a hot topic in 2014? The pipeline was built with the approval of the US Federal government and its agencies and had permission from every state it passes through. How can environmentalists hope to block permission for a fully operational and permitted pipeline?

TransCanada proposed a fourth phase for the pipeline as far back as 2008. This is known as the Keystone XL project and it is Keystone XL that is causing controversy. The XL project will provide a second route through the North-West of America from the Western Canadian Sedimentary Basin in Alberta, Canada. It will supplement the existing capacity provided by the Keystone pipeline. The new route is shorter and will pass through Baker, Montana allowing light crude producers in the Williston Basin to access it.

The Canadian National Energy Board and the Public Utilities Commissions of Montana and South Dakota all approved the XL project by March 2010. Unfortunately, the US Environmental Protection Agency rejected the project's environmental impact study in July 2010 as inadequate. The second impact study was released in 2011. The key environmental issues presented by the pipeline fall in the state of Nebraska.

The Sand Hills region of Nebraska is an area of sand dunes and a National Natural Landmark. The XL route across this area caused President Obama to reject plans for the project in January 2012. Another complaint of environmentalists, which caught the President's attention, is possible contamination of the Ogallala Aquifer. This is a wetland ecosystem that spans eight states, including Nebraska. It also lies on XL's proposed route. The aquifer is a fresh water reserve that supplies drinking water to 2 million citizens in the surrounding area. The Ocallala Aquifer objection was quickly dealt with as thousands of miles of oil pipeline already cross the zone, with little risk to the environment. The Sand Hills issue however, is proving harder for TransCanada to confront.

The Democratic Party attracts the votes of environmentalists and likes to be seen to be siding with the environment in any controversy. However, the US Federal government needs to increase domestic production of oil. Hence, the Democrats have quietly cooperated with the development of the Keystone pipeline in the past. Republicans favour business and prioritize economic development over environmental protection. However, an unseemly rush to bulldoze through approval would expose them to accusations of corruption.

The Governor of Nebraska, Dave Heineman is a Republican. Although the state legislature is nominally non-partisan, Nebraska's senate is dominated by senators of the Republican Party. Aware that the necessary approval process, requiring a study by the state's Public Services Commission could delay the project, the senate of Nebraska passed a law by-passing this requirement and allowing the Governor to approve the project. Heineman wrote his consent in January 2013 and it seemed the project could go ahead without Federal approval. However, as the pipeline crosses an international border, the State Department claims authority over the project and this outranks the authorities of individual states.

Three landowners whose properties lie in the proposed path of XL in Nebraska took the state to court over this controversial move. Judge Stephanie Stacy found in their favour in February 2014, which means the project will have to gain the Public Services Commission's approval. This process will take at least seven months and gives the project's opposition another chance to scupper the deal.

The No Tar Sands Oil federation is an alliance of environmentalist organizations created in 2010 and is the principal opponent of the extension. They are not specifically concerned about the impact on the environment in Nebraska, but want to stop all tar sands oil imports. The injunction against the Nebraskan Governor's approval of the project came from three land owners in the area of the proposed route. So far they have had the most success in blocking the project. Bold Nebraska is a state advocacy group that is coordinating legal action against the pipeline.

Several indicators hint that the President will approve the XL project. His own stated priority for the decision is whether the pipeline would increase global warming. The State Department has already declared that it will not. TransCanada has provided the Federal government with an alternative route that avoids Sand Hills and the State Department has already approved this. The President's own track record on the pipeline also point to his approval. It was President Obama who approved plans for the now operational Phase 3 pipeline in 2012.

Although President Obama told a meeting of state governors in February 2014 that the Stacy ruling would not delay his May 2014 pronouncement on the pipeline, observers believe the President is playing for time and is unlikely to stick to that deadline.

The vigilance of Bold Nebraska and the No Tar Sands Oil campaign means that no fudge or backdoor approval will be overlooked. Approval of the project will damage the Democratic Party's image in its electoral bases in states such as California and New York. Rejection of the project would be a gift to the Republicans in their strongholds, which include Nebraska and Texas. The President will probably approve the project, but not until after the mid-term elections in November 2014.