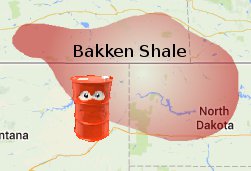 If you can, you could term it delusion, the theory that Shale gas is the answer to all problems in terms of energy. Just extract the gas, ship it across the pipeline and export the excess, or so goes the popular theory (boom. How easy!). Let's call this 'Sale for Energy Security Theory' or SEST)

If you believe in SEST, here's a simple task for you: Take a towel or cloth soaked in water. Wring it. Note the amount of water that comes out. Now, wring it again. Okay, once more. How many drops of water did you get in the third time? Two, three? This is precisely what's happening in the Bakken. Imagine that there aren't buckets of oil underneath the Bakken but towels soaked with oil. And it is only recently that we figured out the technique called "fracking": how to wring a towel full of oil. The first time oil companies twist the towel, a stream of oil comes dripping out. Success! Then second time around, surprise: just a few drops, and the third time and subsequent times... nothing. This is what high depletion rates mean and this is what is happening.

Before that, what's Bakken? The Bakken formation lies in the Williston Basin in North Dakota. Some parts of Bakken also extend into Montana and into the Canadian provinces of Saskatchewan and Manitoba. It is the largest oil field in North America spanning 18,000 square miles. According to an updated oil and gas resource assessment by the United States Geological Survey (USGC), Bakken has estimated oil reserves of 3.65 BBO. In Bakken, the oil rock is located between layers of Shale nearly two miles underground-about 25,000 square miles. Including the Three Forks formation, which lies directly below the Brakken formation, new data from the U.S. Geological Survey estimate 7.4 billion barrels of (technically) recoverable oil, more than 3.65 billion barrels from the assessment in 2008.

Some geologists believe Three Forks to be a trap which just collects oil from the Bakken Shale above. Notwithstanding, for calculation, they are treated as separate formations. But together, they are the largest continuous crude oil accumulation in US.

How much is Bakken worth? In June 2012, North Dakota's oil production stood at about 660 thousand barrels per day, an increase of three percent from May and over 71 percent over June volumes. Production from the Bakken formation during this period averaged 594,000 barrels a day. According to latest estimates, the crude oil production in North Dakota for the month of may 2013 stood at 25,114 thousand barrels. And, the Bakken accounted for about 90 percent of the state's oil production. According to the North Dakota Department of Mineral Resources, Bakken oil production increased from 274,000 barrels per day (bbl/d) in January 2011 to 673,000 bbl/d in January 2013.

As a result, if North Dakota's GDP per capita lagged well below the U.S. average, ranking 38 out of fifty states in 2001, the GDP per capita in 2012 was 29% more than the national average. Most of the rise is attributed to the oil and gas production in Bakken. According to EIA, between 2007 and 2012, annual crude oil production in North Dakota increased fivefold.

As you can see, Bakken is the star of the region. So, who wants to point that the Emperor has no clothes? In other words, the higher-than-normal rate of depletion of fracked wells?

Well, what is depletion? Depletion is a naturally occurring phenomenon. All non renewable resources undergo reduction over a period of time. Oil and gas aren't exempted from this equation, either. Production in wells, fields and reservoirs decline depending on the reserves. Even the oil companies with their huge resources can't prevent depletion (pun intended).

To explain further, it's just like a cake, a new gas or oil field-the more you take, lesser the cream. The first gas/oil field in a particular area, on or offshore, is relatively large with more reserves. The next field in the same area will have lesser production and accessibility. Subsequent fields will be more expensive with lesser production for more effort. How do oil companies manage? Well, the initial production helps recover cost of exploration as well as future costs of depletion. So, as you can guess, oil companies look for more exploration and development opportunities, and thus the clamor for Shale gas. New areas of exploration in unconventional sources owe more to technology than one can imagine.

In turn, the frenzied exploration has significantly helped the domestic oil scene. It IS a fact that oil production in the US has increased and is rising. Taking the time period between 2011 and 2012, domestic oil production increased by 790,000 barrels per day. This is the largest increase in annual output since the start of the oil industry way back in 1859. As per projections, the domestic production is expected to increase by 815,000 bpd over 2012 levels.

Indeed, the chant of Shale is almost deafening. But the question is for how long. You'd have heard of how Brakken would help US in its quest for energy security; the bluster of a country drowned in Shale gas. Would it? The half a dozen news reports from North Dakota-almost every day - paint a rosy picture of the energy scene in the US.

In particular, the most important driver in the domestic energy scene has been the hydraulic fracturing or fracking. Fracking is the process by which water, sand and chemicals are pumped down holes using high pressure to flush out Shale gas and oil trapped in the rock pockets. Many oppose fracking as it causes air pollution as well as ground water contamination-not to forget destruction of pristine forests.

Fracking is still used because up until recently, the US was hugely dependent on the oil from the Middle-East, especially Saudi Arabia. Fracking was too expensive. Then, as time passed, technology advanced. Instead of the conventional vertical wells, horizontal underground wells were introduced which covered more area and thus higher production from sweet spots. Once this fracking came into the picture, the US jumped in as an important oil producer in the world.

Back to the question whether hydraulic fracturing could help export energy from the US sounds fine except for depletion.

Fracked wells age very fast. The initial production is very high so is the rate of depletion. The point is, a newly fracked well may produce 1,000 barrels a day, but this falls by sixty percent the next year, thirty five by the third and fifteen percent by the fourth. Oil companies should replace forty to forty five percent of the current production each year to maintain/increase production. For now at least, the number of wells and cost of production can keep pace with profits because of the higher oil prices. But what happens when the price comes down? The depletion rates will make the wells unviable and the search of oil will continue elsewhere. Roughly the US will need more than 9,000 wells at more than $50 billion to counterbalance the declines.

The number of operating wells in the US has been increasing rapidly while the corresponding productivity (considering all the wells in the US) has declined. There are about 9,000 wells in North Dakota (analyst expect the number to go up to 50,000 by 2030). The state produced more than 800,000 barrels of oil a day in May, a new record. This averages to 89 b/d from each well in North Dakota, hence the need to constantly add new wells in order to maintain a sustainable level of output.

Also, in the case of Bakken, the wells are cheaper compared to the deepwater offshore wells but cost three times those of the conventional onshore wells. This is because the wells must be drilled vertically to nearly two miles, then the angled to horizontal like branches of a tree to more than three miles.

Fracking wells can extend to two miles or three miles to the maximum and Bakken is already saturated with wells. Counting those 50,000 future wells, most of them would be located outside the prime spots. Production from these wells would not have the comfort of those higher first year productivity as those wells located in the prime areas.

Then there's the environmental angle to it as well. Apart from the ground water pollution there's the added effect of flares. Natural gas has to be piped immediately after drilling. And, lack of extensive pipeline in the Bakken leads to flaring-burning the gas. So much so, flares in Williston can be seen from space. Talk about manmade landmarks!

Further, what when all these unconventional sources, we've become so dependent to dry up? Well, according to analysis by EIA, the 'inflection point' could depend on various factors like the economics of scale reduce, depletion of sweet spots but could still arrive as soon as 2014. This is a moving target however, as the coming of this inflection point can be postponed by increasing the number of drilling rigs and other technological breakthroughs (fracking was one of them). The proverbial can will likely be kicked down some more.

Sooner or later, you'd realize that Shale is an industry of diminishing returns. In plain terms, a temporary bubble waiting to burst thanks to depletion. SEST? Enjoy. But then, we've warned you.

« Previous
Oil Price and Egypt
Next »
Oil Price Volatility on the Way?